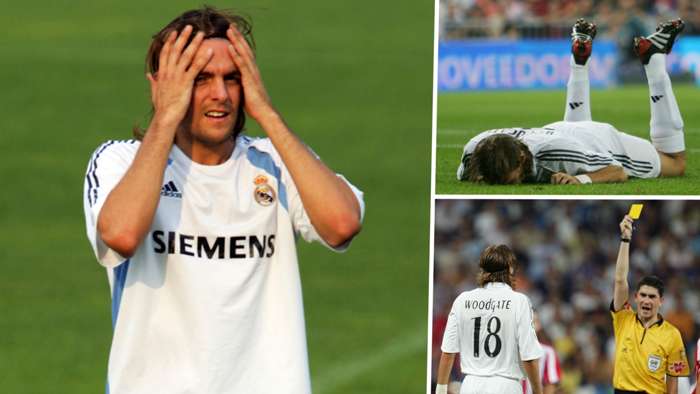 Real Madrid's decision to buy Newcastle centre-back Jonathan Woodgate in 2004 for £13 million (€15m/$17m) took the football world by surprise– and the following years did little to quell that initial sense of shock.

Unfortunately, his exploits for Newcastle came with the caveat of regular injuries, with the Middlesbrough junior playing just 37 out of a possible 128 games during his time at St James' Park.

So, with Woodgate once again experiencing fitness issues in the summer of 2004, Newcastle could hardly believe it when Madrid came calling.

"This is an extreme, exceptional offer which, basically, we had to take," manager Sir Bobby Robson said at the time. "No-one is pleased that he's gone because we know what we've lost. At his best, he's the best in the country."

After scraping through a medical with the Ligagiants, Woodgate officially became a Madrid player, joining a squad that contained compatriots Michael Owen and David Beckham, as well as Zinedine Zidane, Roberto Carlos, Luis Figo and Ronaldo.

His debut would have to wait quite a bit longer, however, with the England international not featuring at all in his first year with Los Blancos. Given he had been sidelined so long, it was anticipated that Woodgate would be rusty when he finally returned to the field. However, his first appearance was nothing short of a nightmare.

Not only did he score an own goal against Athletic Club, the centre-half's night came to an early end after being shown a questionable second yellow card.

Luckily, Madrid still managed to win the match 3-1 and the club's fans showing a willingness to give Woodgate another chance.

"It was not the best start in the world," Woodgate said after his disastrous debut.

"Obviously, I did not want to get an own goal.I just can't believe I got sent off. I didn't think the second yellow card was right, but it's the referee's decision.

"I want to thank the public, who were brilliant when I was walking off. They were all clapping and cheering.Physically, I felt good. My leg was no problem and I felt strong. I will come back stronger."

True to his word, Woodgate recovered well from making such a dreadful first impression, scoring an equaliser the following month in a Champions League match against Rosenborg and, by the beginning of 2006, he was putting in commanding performances as the team picked up regular clean sheets.

However, his momentum was halted by more injuries that saw his second campaign in Spain end with just 14 appearances in all competitions.

Fabio Capello's arrival ahead of the start of the 2006-07 season sawLos Blancos bring in Juventus stalwartFabio Cannavaro but Woodgate remained hopeful he'd be given a chance to prove his worth to the Italian coach.

Initially, Real resisted that urge by simply sending him to Middlesbrough on loan but then opted to let him join his hometown club permanently in April 2007 for£7m ($9.2m).

After excelling in his first season on Riverside, injuries once again held Woodgateback during the following campaign but he still managed to secure a move to Tottenham in 2007.

However, the defender's career continued on a sadly downward trajectory, with strong performances overshadowed by long-term injury issues, and he won the last of his eight England caps in 2008.

Woodgate battled on bravely but eventually hung up his boots in 2016.

As Robson pointed out, Woodgate was one of England's finest defenders when fully fit but his playing career is best remembered for his dismal spell at the Santiago Bernabeu, with a Marca fan poll oncedubbing him Madrid's worst signing of the 21st century.

Despite picking up that mantle, Woodgate looks back on his time in Spain fondly, albeit with some understandable regret overwhat could have been.