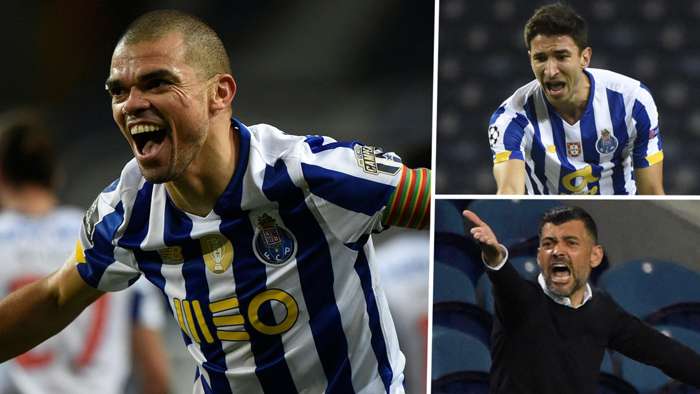 Porto are on the march again. Ready to roll, ready to fight, ready to get stuck right into another European heavyweight.

They may be widely regarded as the weakest team left in this season’s Champions League, but that will notbother Sergio Conceicao’s side.

Few teams enjoy the role of the underdog like the Portuguese champions do.

“Why can’t we do something special again?” the midfielder Marko Grujic asks Goalduring our exclusive interview. “We know there are no easy games at this stage of the competition, but we have already shown we can do it this season.”

It is 17 years since Jose Mourinho led the Dragoes to Champions League glory. What a team that was, too; the team of Deco and Maniche and Costinha, of Vitor Baia and Paulo Ferreira and Ricardo Carvalho.

They won the UEFA Cup in 2003, and followed that up a year later, beating Monaco in Gelsenkirchen to lift their second European Cup crown. It was the making of Mourinho, who left for Chelsea that summer and never looked back.

Could Porto’s current manager do something similar? Conceicao couldn’t feature in that 2004 triumph – he was on loan from Lazio, and therefore cup-tied – but the 46-year-old fitness fanatic has his eyes on the prize once more.

He hasalready won two Portuguese titles, and nowislooking to bolster his reputation further by slipping into the last four of the Champions League.

“There’s a lot of speculation on whether he will leave in the summer or stay,” says Grujic, “but whatever happens, he has the potential to be one of the biggest coaches in the next five or 10 years.

“He’s very motivated, very aggressive with players. He is big on discipline. He doesn’t play defensive football, but he likes his team to be very organised and disciplined. Rule number one is not to concede goals, and obviously that gives you chances to win games.

“He can still play, by the way! He’s enormously fit. He runs 15-20 kilometres every day, so when he tells us we have to run, we can’t have any argument! You see him, and you know you have to do it.”

Porto are under pressure domestically. They sit second in the table, seven points behind unbeaten Liga NOS leaders Sporting C.P.. Their grip on their crown is loosening, although they did gain two points on their rivals at the weekend.

Their resilience, and their quality, has been on display for all to see in Europe, however. They qualified comfortably from their group, drawing with Manchester City en route, and then, in the last 16, overcame Cristiano Ronaldo and Juventus on away goals after a pulsating two-legged affair.

“It was a magnificent result,” says Grujic, who is on a season-long loan from Liverpool. “Let’s be honest, they were the favourites to go through, and I think a lot of people thought when they got the away goal in the first leg that it would be really difficult for us.”

It was, in fairness. Porto led early in the second leg, but lost forward Mehdi Taremi to a red card just after half-time. Juventus scored twice through Federico Chiesa to force extra-time, but an incredible rearguard action, led by the 38-year-old Pepe, saw them hold on before Sergio Oliveira’s long-range free-kick sent them through, sparking wild scenes of celebration and ensuring Ronaldo was left with a face like thunder.

“He went straight to the changing room after the game,” Grujic says. “I don’t think he even spoke with Pepe, who is one of his best friends.

“But that speaks to his winning mentality. He wants to win every game, and if he doesn’t then he is completely upset. I understand and respect that.”

Grujic cannot speak highly enough of Pepe, a three-time Champions League winner with Real Madrid and unquestionably the leader of this Porto side.

“Wow!” he says, wide-eyed. “He’s a guy who brings forward every other player on the team, and a guy you can learn a lot from as a young player. He’s a real leader, a real winner, someone to follow.

“The best thing with him is he’s still hungry. He’s won everything, played over 10 years with Madrid, so much experience, but he still wants it so bad.

“He just signed another two years at Porto, and even at 38 he is still 100 per cent focused on every match, not only Champions League games but matches against smaller teams in Portugal. He treats them all the same, it’s really incredible, and proves why he has made such a magnificent career.”

Grujic smiles when we ask whether Pepe, known for his penchant for the dark arts, had any influence on an incident towards the end of the second leg against Juventus.

Grujic, with time running out and Porto holding on, hit the ground clutching his face under a challenge from Adrien Rabiot. As the Juve man protested, television cameras showed the Serb peeking a look at the referee from behind his hands. The free-kick was given.

“I didn’t realise it would be all over social media!” Grujic laughs. “It was quite funny to see it back, but it was about getting over the line for the team.

“That’s what I’m talking about with winning mentality. In every way, you need to try and get the best possible result for your team, not for yourself.

"I was not doing that to be popular on social media, I was trying to help the team to give us a few more seconds to rest because Juventus were putting big, big pressure on us. That’s football.”

With Oliveira, a scorer in both legs against Juventus, suspended, Grujic is almost certain to start against Chelsea on Wednesday night. He cannot wait for the battle.

“The club already reached their target for this season, in this sense,” he says. “We have no pressure at all going into the Chelsea game, we want to enjoy it so let’s try to make another great result.

“We are full of respect for Chelsea and we know it will be tough. They have an unbelievably strong squad, with many quality players in every position. That’s their main attribute for me.

“You look at their midfielders and forwards, it’s incredible. They can play any combination and it’s a strong team. You see sometimes, [Christian] Pulisic doesn’t even play! Or sometimes [Timo] Werner is up front and [Olivier] Giroud is on the bench, so [Tammy] Abraham isn’t even in the squad! That’s how strong they are.

“The midfield is so strong. [NGolo] Kante, wow! He covers so much ground, it’s ridiculous. I heard them say in England that he is like having two midfielders in one! I never played against him, so I am really looking forward to that challenge.

"I will have to run a lot against him, for sure, and then they have [Mateo] Kovacic, Jorginho and [Mason]Mount, who are great on the ball.

“We will look to win, but we cannot expect to just turn up and score goals. We have to be smart, protect ourselves but try to take the best possible result to London.”

And has he dared to dream yet about a potential semi-final against his parent club Liverpool?