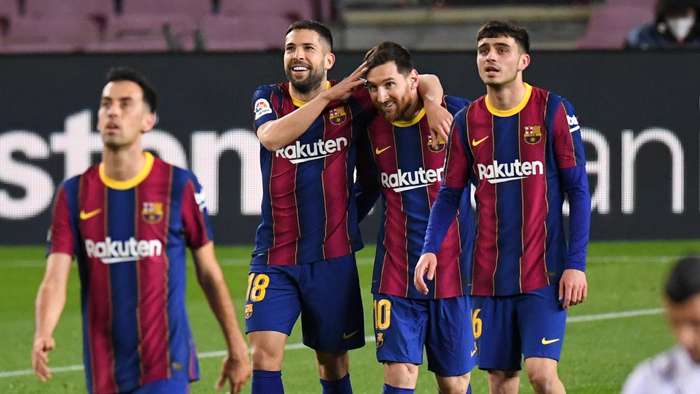 Barcelona midfielder Pedri hopes Lionel Messi will be his team-mate for “many years” amid frenzied speculation about the Argentine’s future at Camp Nou.

Messi is out of contract at the end of the season and it remains to be seen whether he will agree to a new deal having attempted to leave the club last summer.

However, the election of Joan Laporta as Barcelona’s new president has given fresh impetus to the club’s efforts to hang on to the striker, with Pedri among a clutch of emerging Barca youngsters keen to play alongside thesix-time Ballon dOr winner for as long as possible.

Pedri admits he couldn’t believe his eyes when he joined Messi for his first Barca training session last year.

The summer signing from Las Palmas told El Club del Deportista: "The first day I saw Messi I thought it was a lie.

“When I was next to Messi, I was very shocked to see him. It was like being on television or a video game, I almost didnt believe it.

“Playing with Messi is easy because when you give it to him you know that things are going to happen. And thats what I try to do, give it to them in the best positions so that it is the most beneficial for the team."

On Messi’s future, Pedri added: “I hope I can be close to him for several years. It would be great if I could continue to enjoy playing with Messi and learn many things alongside him.”

Joan Laporta made a direct plea to Messi to stay at Camp Nou during his inauguration earlier this week,highlighting his clear priority in the opening months of his presidency.

Manchester City and Paris Saint-Germain are considered the front-runners for Messis signature should he decide to leave, mainly because they are the only sides who could realistically afford his wages.

However,recent speculation suggests Messi could well stay at the club after all.

Their upturn in form is likely to be a key factor in his thinking, with boss Ronald Koeman building anew-look side around Messi that includes a number of talented youngsters such as Pedri, Riqui Puig, Ansu Fati and Ilaix Moriba.

The reported prospect of Manchester City striker and Messi’s close friend Sergio Aguero joining in the summer could also help persuade the 33-year-oldto stick with the club he has represented since he was 13.