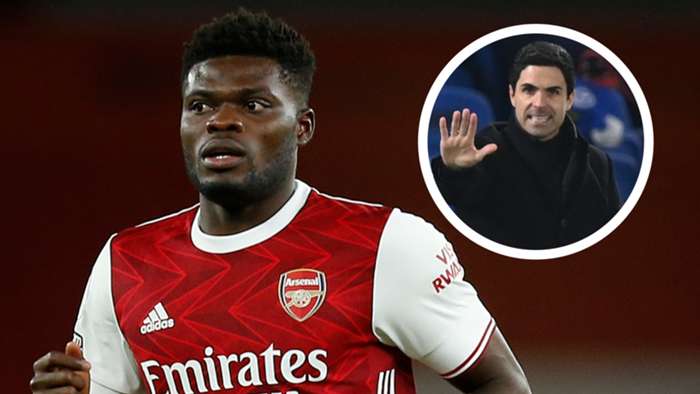 A lot has changed since Arsenal’s 1-0 win at Manchester United on November 1.

Arsenalmeanwhile, who were five points off top spot after the victory, have drifted alarmingly in the other direction, although three successive wins in the league have seen them move up to lofty heights of 11th ahead of Thursday night’s meeting with Crystal Palace at the Emirates Stadium.

But one thing that has stayed the same since that Sunday afternoon at Old Trafford is that it remains the last time Thomas Partey, Arsenal’s £45 million ($58m) summer signing from Atletico Madrid, played a full 90 minutes for his new club.

The 27-year-old was forced off at half-time against Aston Villa in the game which followed on from the win over the Red Devils, and he has managed just one more appearance since, though he did not even make it to the interval when the same injury flared up on his return against Tottenham on December 6 .

In total, Partey has played just 370 minutes of football since his move to Arsenal on the final day of the summer transfer window. This was not how his big money move was supposed to go.

“We’re in January and I think he’s played two and a half games in the league,” bemoaned Mikel Arteta earlier this month. “He was our main signing, so we’ve been missing him.

“He brings something different to the team and is a player with an enormous talent. He’s also someone that can transform the team in the way we want.

“If we can have him and keep him healthy, he will contribute in a really positive way.”

Fortunately for Arsenal, Partey is now healthy and ready to play his part having been back in full training for the past fortnight.

Arsenal have been cautious with him, with Arteta and the medical staff mindful of what happened when he was rushed back to face Spurs in the north London derby at the end of last year.

But there is now a belief he is now ready to return and make the impact that everyone at the club was expecting when they took the decision to invest so heavily on him in the summer.

“He makes players better around him and that's a big, big quality. It's incredible that we are in January, we signed him in October and we only played him twice two full 90 minutes in the league. We haven't really seen the impact we believe he could have on the team.

“Obviously we have missed him, I think it's going to be a big bonus if we can keep him fit.”

Partey’s performance during the win at Manchester United in November gave Arsenal fans a tantalising look at what could be to come over the next few years.

It was the type of dominant midfield display that the Gunners have lacked since the days of Patrick Vieira and Gilberto Silva. It even had Roy Keane drooling in the Sky Sports studio.

“The more I look at him the more I wish he was in Man United’s midfield,” Keane said after the game.

“Obviously going back with Arsenal I had my battles with Patrick Vieira, I think this kid has got a chance of matching what Patrick used to do.

“He’s big, he’s strong, he’s aggressive and he likes to pass it forward. He can deal with the ball, he looks comfortable on the ball, just small little details, composure, good first touch, retaining possession, that’s the name of the game.”

Partey was brought in to transform Arsenal’s midfield and he did just that against United.

" He could play for anyone," said ex-Gunners forward Paul Merson ."I look atManchester City,Manchester United andLiverpool. It's an absolute steal for Arsenal."

Partey had more touches (84) than any Arsenal player at Old Trafford and competed in the most duels (15). Of the players that started the game, no player completed as many successful passes (93.2 per cent), with 36 of his 59 passes being made in the opposition half.

He also made four tackles - only Arsenal team-mate Gabriel (5) made more -and he gained possession 11 times. It was the perfect all round performance from the Ghana international.

And that is why his absence ever since has been particularly frustrating, not just for Arsenal, but for the player himself.

“When you are injured you feel first of all the responsibility when the club has made the effort we made to sign him,” said Arteta.

“He was so willing for months to be joining us. He really wants to be a part of it and knows how much he can help.

“Then he had to deal with the injuries, with the lockdown and moving into a new place and that's been tough for him. That's why sometimes he was rushing and wanted to do everything straight away – because he's so willing to come back and he doesn't want to be alone at home.

“But he's in a really good place now, he's settled really well in the dressing room, around the staff. He's a special character and hopefully we can see him on the pitch finally.”

Partey’s return has been a long time coming, and the fact that it has arrived with Arsenal on a four-match winning streak makes it all the more sweeter.

Five defeats in eight league games saw him rushed back out of necessity before Christmas, but the upturn in form in recent weeks have allowed Arsenal to take their time and ensure their star midfielder is completely ready for the demands of the Premier League.

It is likely he will slot in alongside Granit Xhaka in the heart of the 4-2-3-1 formation Arteta has settled on during the past month, adding some real steel in front of the defence but also a much needed link to the attack.

His ball carrying prowess and his ability to drive forward and break the lines from deep is unrivalled in the Arsenal squad, and it iswhy Arteta is so adamant Partey’s presence will be so transformative to his team.