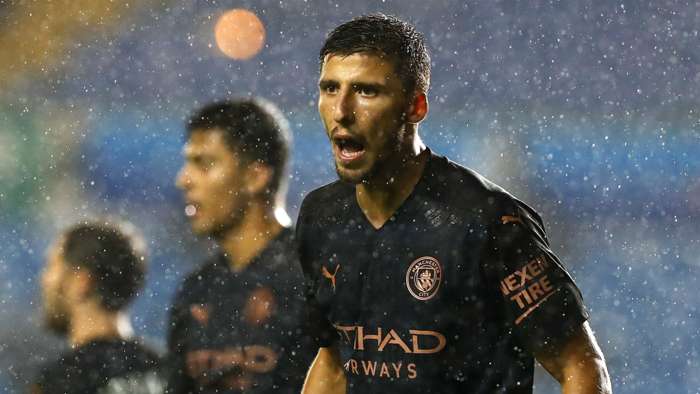 Pep Guardiola says this season's packed fixture schedule is no issue for Manchester City star Ruben Dias, who he has described as an "incredible player".

The 23-year-old has helped transformthe Blues into the best defensive side in the Premier Leaguewhile forging a formidable partnership with John Stones.

Dias has already racked up 22 appearances across all competitions for City in total, with his latest stellar display coming in a Carabao Cup semi-final win over Manchester United.

The Portuguese was colossal as Guardiola's side triumphed 2-0 in the derby clash at Old Trafford, and he could feature yet again in an FA Cup third-round tie against Birmingham City on Sunday.

Guardiola has no concerns that Dias will be hampered by burnout, having been amazed by the centre-back's powers of recovery in his first few months at Etihad Stadium.

“The player who influences the team and is important in the team is the player who can play every three days,”the Spanish head coach told City's official website.

“The quality is there, but if a player gets injured every few weeks, that is not good for the team.

“When you buy players you know their quality but don't know if they can play every three days, but he recovers immediately.

“His ability is incredible. He wants to learn. All of us are impressed with how he takes care of his body and his mind.

“I can assure you we have signed an incredible player for the next years. And it is not easy to find that.

"That’s why we are so fortunate. Hopefully, he can continue at this level.”

One man who could also be in Guardiola's line-up when City take on Birmingham is Zack Steffen, who has been filling in between the sticks in the coronavirus-enforced absence of Ederson.

The Blues head coach says Ederson remains his first-choice shot-stopper, but admits Steffen has given him more of a selection dilemma after performing well in wins against Chelsea and United.

“He can fight for No.1,” said Guardiola. “He can put pressure on Eddie, but Eddie is the No.1 in this position right now. If he performs well, he stays No.1.

“But we cannot forget he Steffen played at Stamford Bridge and Old Trafford and solved all the situations he faced brilliantly.”

Guardiola also reserved special praise for Derby County loanee Scott Carson, with the veteran 'keeper considered to have had a positive effect on the dressing room over the past few months.