'No pressure' - Klopp desperate to unleash Minamino at Liverpool 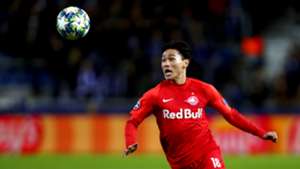 Liverpool manager Jurgen Klopp is eager to add new signing Takumi Minamino to his depleted squad as soon as possible.

The Japanese attacker will officially join the Reds in the new year after securing a ?7.25m ($10m) transfer from Salzburg.

Klopp's side are currently juggling a busy period of games and with some players currently available, the German is desperate to unleash Minamino but admitted they won't be cutting any corners in getting the 24-year-old integrated into their set-up.

"January 1," Klopp said when asked when Minamino will join the squad. "Look at our situation, I understand the question but how can you ask me in the moment when we have 14 adult players?

"I would be happy if he was half as good as he is, if he could be here now in this moment and could help us - and he could help us.

"That's all good, we will see how quick it goes. The ways in which we play are not too different, there are a lot of things which he has learned already at Salzburg. That makes it so good for us, actually.

"We have a lot of patterns on the game which are different to what Salzburg are doing. So, offensively, when you speak about what he is used to, it is more or less defensively. He is an offensive player, so offensively how can we bring him into a situation that he feels completely comfortable and to use the things instinctively and not because we told him?

"That's what we speak every year about when we say [about new signings], 'Why he is not already in?' all the time and stuff like this. There is no pressure, there is absolutely no pressure, when he is coming in January.

Liverpool are currently 10 points clear at the Premier League summit with a game in hand and travel to second-placed Leicester City on Thursday.

The Reds are yet to lose across 17 league games this season and have won their past eight matches in the domestic competition.