No Thiago, no problem: Back Liverpool's winning machine to 'attack' Premier League title 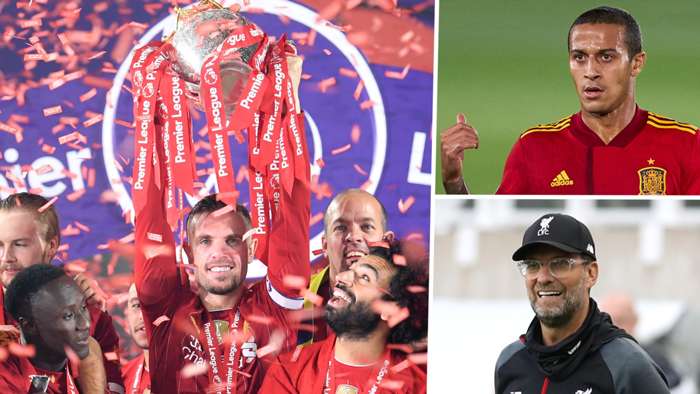 So, here we go again.

After scaling Everest, Liverpool are ready to pull on their hiking boots once more.

The challenge which awaits them is perhaps the biggest of all.

Leeds United, back in the top flight after 16 years in the wilderness, are the visitors to Anfield – the pick of the opening-day fixtures, for sure, even if it will, sadly, be behind closed doors.

All eyes, naturally, are on Jurgen Klopp’s side heading into this season. Having ended their 30-year wait for a league title in such spectacular fashion last time out, how will they handle the challenge of being champions this time around? For so long the hunters, now they are the hunted. And the pack look hungry.

“You can write stories about us being the defending champions or whatever,” said Klopp back in June, “but this is what I say – we will not defend anything, we will attack it!”

Some fans, doubtless, would point out that such fighting talk is yet to be backed up by a statement of intent in the transfer market, but we should take Klopp on his word with this one.

Having followed up their Champions League win in 2019 with that remarkable Premier League campaign, and having picked up 196 points over the past two campaigns, Klopp and his players are not ready to rest on their laurels now.

“If we stay at the same level, it won’t be good enough,” says vice-captain James Milner. “We have a target on our backs and they are going to want to knock us off the top.”

Liverpool know that their rivals are sharpening their knives. Manchester City, in particular, have a point to prove this season.

Pep Guardiola is adamant that the 18-point gap between the sides last term is not a true reflection, and City’s 4-0 win at the Etihad in July served only to underline how motivated Kevin De Bruyne and Co. will be going forward. Certainly, we should not expect Guardiola’s men to lose nine league games this time around.

Can new challengers emerge? Both Manchester United and Chelsea finished 33 points behind Klopp’s men last season, but both are heading into the new campaign with renewed optimism – as, indeed, are Jose Mourinho’s Tottenham and Arsenal under Mikel Arteta.

City are title favourites according to the bookmakers, but it would take a brave punter to back against Liverpool.

They may not have strengthened significantly – Greek left-back Kostas Tsimikas is the only first-team signing at this stage – but they remain a squad packed with talent, desire and, Klopp believes, potential for further improvement.

“What we want is to create our transfers internally,” he has said. He believes the emergence of Curtis Jones and Neco Williams (both 19), as well as 17-year-old Harvey Elliott, can strengthen his hand, while he is still to see the very best from midfielder Naby Keita or January signing Takumi Minamino. Both have looked especially sharp during pre-season.

Elsewhere, the questions remain the same. Can they keep their key players fit? Can their front three continue to shine for a fourth successive season? And will they continue to find solutions to the tactical puzzles posed by opponents who will be supremely motivated to upset the Red apple cart?

Under Klopp, Liverpool have evolved from a wild attacking side with a soft underbelly into a relentless winning machine.

Their standards are high, each and every day, and in Klopp and assistant Pep Lijnders, they have been able to make subtle but important changes to their playing style, year upon year, keeping themselves ahead of the curve.

We should expect that to continue this year. “Unpredictability,” is what Lijnders says is required if they are to build on their success.

Liverpool know that teams will look to shut down their full-backs, Trent Alexander-Arnold and Andy Robertson, and know that finding new sources of creativity may be key. To that end, and with a fixture list congested like never before, the likes of Keita, Jones and Minamino could have big roles to play.

Otherwise, Klopp will ask his gun players to step up once more. Sadio Mane and Mo Salah remain two of the world’s best wide forwards – both reached 20 goals in all competitions once again last season – while we can expect a more prolific campaign from Roberto Firmino, who remains integral despite managing only nine league goals in 2019-20.

At the back, Virgil van Dijk will continue to lead a defence which has been the meanest in the division for the past two years. Joe Gomez remains likeliest to partner the Dutchman, though the fit-again Joel Matip should offer strong competition.

The addition of another senior centre-back would be wise given the Cameroon international’s fitness record and the summer departure of Dejan Lovren.

Klopp has been impressed by Frenchman Billy Koumetio during pre-season, but asking a 17-year-old, or indeed the 18-year-olds Ki-Jana Hoever or Sepp van den Berg, to step up as fourth choice in the Premier League would be a risk, to say the least.

In midfield, Liverpool continue to be linked with Bayern Munich star Thiago Alcantara, while doubts surround the future of Gini Wijnaldum, who is wanted by Barcelona. It remains to be seen how those situations are resolved before the transfer window closes.

But even if Thiago doesn’t arrive, and even if Klopp doesn’t secure an additional centre-back or forward cover, the champions should head into the campaign confident.

They have proven themselves the most consistent team in the league, one capable of winning well and winning ugly. Of their 32 league wins last season – a record in a 38-game season – 14 were by a single goal. Their mentality cannot be questioned.

It is unreasonable to expect a repeat of last year’s exploits, where they won 28 of their first 29 games and had racked up a 25-point lead by February. Supporters may have to reacquaint themselves with the feeling of drawing and losing games, and of the cut-and-thrust of a genuine title race. It should be closer, more competitive, more tense.

That, in a strange way, may aid Liverpool. Much has been made of their drop-off, post title win, but it is hard to judge the psychological impact such a historic achievement has on players.

They will always demand from themselves, but in truth the league was done and dusted by Boxing Day, such was their dominance.

Defending the Premier League title is tough – only Guardiola’s City have managed to do it since 2009, and only Alex Ferguson’s United and Mourinho’s Chelsea did it before that –- and that is the challenge facing Liverpool.

Klopp managed back-to-back championships at Borussia Dortmund, and believes he has the tools to repeat that at Anfield, as well as competing once again for the Champions League.

The challengers are gathering, the doubters are assembling and the spotlight shines greater than it ever has, but Liverpool look the team to beat heading into the new campaign.

Please gamble responsibly, of course, but you should back the Reds to defend their crown this season.