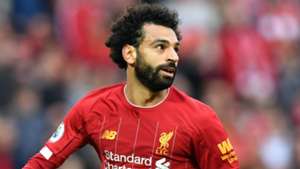 Jurgen Klopp is "not worried" about Mohamed Salah's fitness, with the Liverpool forward looking good in training as he prepares to return to action in a Champions League clash with Napoli.

The Egypt international sat out a Premier League trip to Crystal Palace on Saturday.

He was named among the Reds' substitutes, and was readied to come on at one stage, but his services were not required in a dogged 2-1 win.

With no risks taken on his niggling ankle complaint, a welcome period of rest has allowed the 27-year-old to recuperate.

Klopp is now expecting Salah to figure in midweek European action, with there nothing to suggest that a prolific frontman will not be in contention.

The Liverpool boss told reporters at his pre-match press conference: "Mo looks really good. He looked really good in training, the day before yesterday especially, after the game. It was really good.

"Yesterday [Monday] we didn't do too much, so we will see today - but I'm not worried about it."

Klopp is also expecting Naby Keita to be at his disposal despite the midfielder having suffered a bout of illness over the weekend.

He told the club's official website when asked for a further fitness update on his squad as a whole: "Good, good. No long-term injuries - no Joel [Matip], no Clyney, no Paul [Glatzel].

"Naby was a little bit [ill] after the game, he trained yesterday but all the others look fine."

Matip remains some way off making a return to action, with the 28-year-old centre-half having undergone further scans on the knee issue which is keeping him sidelined.

"This week we have kind of a reassessment scan where you have a look at how it improved, but there's nothing you can really do a lot, you have to wait until the body is doing the job pretty much. And we will see that, then we'll know more.

With Matip sidelined, Dejan Lovren has been partnering Virgil van Dijk at the heart of Liverpool's back four, with Joe Gomez another versatile option at Klopp's disposal.