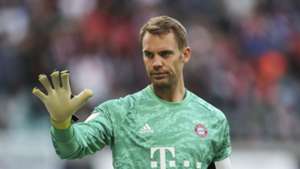 Manuel Neuer is unlikely to be at Bayern Munich next season, claims Lothar Matthaus, with a contract dispute expected to lead the World Cup winner through the exits at the Allianz Arena.

The Germany international goalkeeper has been hoping to commit to a new long-term deal with the Bundesliga champions.

Despite being 34 years of age, a man who has spent the last nine seasons with Bayern is said to have requested a five-year deal from his current employers.

Those demands have not been met, with Neuer's current terms due to expire in the summer of 2021.

Rather than run the risk of seeing a modern-day great enter the final 12 months of that agreement and head towards free agency, Matthaus believes Bayern will sanction a move elsewhere.

He told Sky Deutschland: "I can understand his desire for security and a long contract very well. But five years is also a long time.

"He should, as mentioned, not forget how loyal FC Bayern was to him in every phase. For both sides, it would be wonderful if Manuel stays a few years more.

"He should first extend for three years and if he's still healthy and performs he'll get the next contract."

Bayern legend Matthaus added: "I think the signs are pointing to his departure.

"Probably a little more was expected of him, and the expectations he put on himself were undoubtedly higher. I don't think that he will still be playing in Munich next season."

One man who has committed to fresh terms at Bayern is Thomas Muller.

The 30-year-old forward has penned a new deal through to 2023, allowing him to remain a one-club man.

That agreement comes as no surprise to Matthaus, with Muller always expected to stay put despite seeing transfer talk sparked around him once again early on in the current campaign.

The 1990 World Cup winner said: "I don't see any potential for discussion here.

"Frankly, Thomas doesn't fit any other club in the world better than FC Bayern. There's nothing more to say about that."