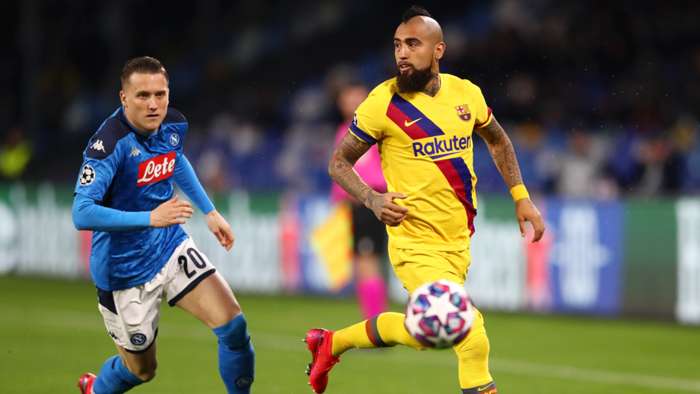 Napoli president Aurelio De Laurentiis has urged UEFA to move the club's Champions League clash away to Barcelona amid the ongoing Covid-19 crisis in Spain.

The reverse fixture at Camp Nou was suspended indefinitely due to the coronavirus outbreak, which saw all major leagues across Europeshut down for three months.

The Bundesliga was first to return at the end of May, before La Liga, Serie A and the Premier League all followed suit in June as the number of Covid-19 cases across the continent began to drop.

UEFA also announced that the Champions League would be returning in August, with a new format introduced which will see the quarter-finals and semi-finals played as one-off matches in Lisbon, Portugal.

However, the remaining round of 16 fixtures will still be played in the original venues, and as it stands, Barca will play host to Napoli on August 8 at an empty Camp Nou.

Due to the continued threat of coronavirus, all remaining games in the competitionwill be played behind closed doors, but there are still concerns over the safety of players and staff.

A spike in Covid-19 cases has been recorded in Spain's north-easternCataloniaregion, and health authorities have instructed people to remain in their homes for 15 days to contain the spread.

De Laurentiis believes Napoli's meeting with Barca shouldtake place outside of Spain due to the increased risk of infection, as he told Sky Italia:“The match against Barcelona will always be a great match. This summer we played two, then we had a third in the first leg of the last 16 in the Champions League. Now, we will play a fourth.

“We hear doubts and fears coming from Spain. UEFA is indifferent, there is no one who knows how to run the shop.

“If they have decided that the Champions League is done in Portugal and the Europa League in Germany, I think we should play the return leg in Portugal or Germany.