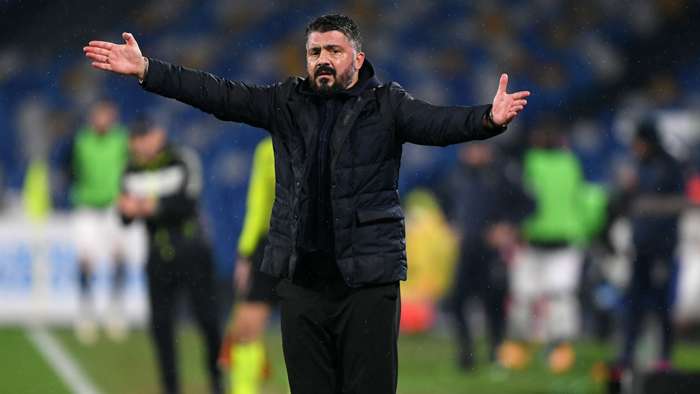 Gennaro Gattuso insisted Napoli cannot always be beautiful like Hollywood actor Brad Pitt as he urged his side to be a "bit ugly" like him.

Lorenzo Insigne had opened the scoring via a 15th-minute penalty to move level with Careca for seventh place on Napoli's all-time scorers list in Serie A (73) and also seventh position across all competitions (97).

Udinese's Kevin Lasagna equalised 12 minutes later before Bakayoko ensured Napoli bounced back from their shock defeat at home to Spezia.

Napoli are sixth in Serie A – nine points adrift of leaders AC Milan – and head coach Gattuso told his team to get down and dirty.

"I don't get angry with my players for their technique, it's when they don't smell fear. I think we are a team who repeatedly don't spot the danger when it's coming. I want to see a team that keeps going," Gattuso told Sky Sport Italia .

"I don't want us to miss a chance, then I see immediately the defenders start complaining to each other, oh we missed a goal, that means we're bound to concede one. No! We have to work as a team.

"We have to improve in situations when we're under pressure, because I know I don't have a side that can soak up pressure for ages, that's not our approach, but we can do better than we are now. You can't tell me that mentality cannot be improved or coached. I don't believe it.

"What happened with Spezia infuriated me, because the ball came off the post, we had five players ball-watching while Tommaso Pobega reacted quicker. That is a lack of determination, that is unacceptable.