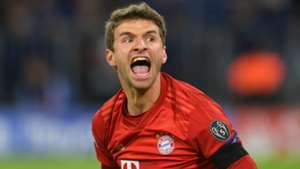 Thomas Muller has committed to a new contract at Bayern Munich, with fresh terms set to keep the World Cup winner with the Bundesliga champions until 2023.

Transfer talk had resurfaced around the 30-year-old forward at the start of the 2019-20 campaign.

Having slipped down the pecking order at the Allianz Arena under Niko Kovac, there were suggestions that the Germany international could move on.

He has, however, played his way back into favour, with Hansi Flick embracing his experience and undoubted quality, with an extension to his deal earned in the process.

Muller has been a one-club man up until this point, with a Bavarian native having taken in 521 appearances for Bayern while recording 195 goals.