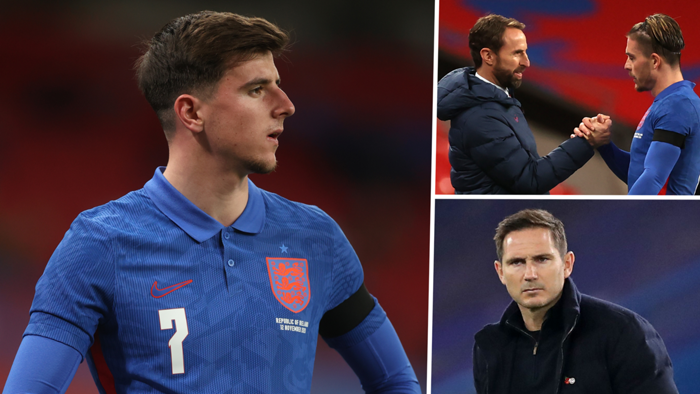 Mason Mount is learning that he may never shake off the haters but his self-sacrificial display in England's 3-0 win over the Republic of Ireland shows why those in the game love him.

Like his Chelsea counterpart Frank Lampard, England manager Southgate knows he can rely on Mount's cleverness in possession, off-the-ball awareness and work ethic no matter what position he's asked to play.

On this occasion, Mount operated as a deep-lying playmaker, which made his side look better balanced than in previous international matches.

However, it meant he had just one touch in Ireland's box and never looked like scoring. He allowed England's front three to play with greater freedom than usual, though, while wing-backs Bukayo Saka and Reece James were allowed to surge forward when appropriate.

Even centre-half Harry Maguire ended up with more touches in the opposition box than Mount but that shouldn't take anything away from the mature performance of a player with footballing intelligence well beyond his years.

This encouraging display arrived amid a misunderstanding about his game, with sections of Chelsea supporters labelling him the teacher's pet at Stamford Bridge, because of the manager's apparent reluctance to drop him despite his perceived limitations.

Some England fans have picked up on that theme, arguing his status as a starter is undeserved in light of a series of unimpressive attacking displays from the Three Lions.

The main grip appears to be that Mount is somehow blocking the progression of Aston Villa star Jack Grealish.

After Mount laughed off those suggestions ahead of kick-off at Wembley on Thursday night, Grealish leapt to the defence of his team-mate and dismissed the notion that the pair cannot play together.

"I love Mason," he said. "It’s a bit annoying, actually, because he probably gets a bit of stick about it at times but I’ve always been close with him.

"I think he’s an absolutely terrific player. I don’t even feel like we’re fighting for the same spot, to be honest. If anything, I think Mason’s underrated and he deserves all the credit he gets.

"I think that people who know about football understand just how good he is."

Grealish's disdain for criticism over Mount's continued selection is echoed by everyone within the English game.

Mount has been unfairly judged by goals and assists for club and country, given his role has often been to bring balance to a side disrupted by new signings or new call-ups.

His willingness to put the team ahead of his own interests has allowed Lampard to move Mount around during the opening weeks of the new season, as he experiments with summer signings Kai Havertz, Timo Werner and Hakim Ziyech.

And, coincidentally, Chelsea's most satisfying performance of the campaign to date, a 4-1 win over Sheffield United, came with Mount sitting deep in midfield, just as he did against Ireland.

Mount is already something of a wise old head, having already racked up an incredible 156 senior appearances for his loan clubs, Chelsea and England, and he is now proving himself a calming presence in Lampard and Southgate's teams.

England have not been shy about their hopes of winning Euro 2020, which has been moved to 2021 due to the coronavirus pandemic, Southgate is edging closer to figuring out his ideal XI after a period of uncertainty.

The Three Lions are desperate better their run to the semi-finals of the 2018 World Cup but know that they will only do so by addressing their biggest weakness in Russia: a lack of creativity in midfield.

Mount, then, has a crucial role to play.

His selflessness means Southgate can trust him defensively but his well-crafted attacking attributes mean that he can also offer solutions rather problems in the attacking third.

Indeed, in shunning typical English midfielders as role models as a kid, perhaps Mount can serve his country well precisely because he sees the game, and his role, a bit differently to the average player.

"I looked at Luka Modric when he was in the Premier League at Tottenham. Andres Iniesta at Barcelona in his prime, playing their tiki-taka, I was always watching them on YouTube," Mount toldGoalin 2019.

"I saw the games as well. I think those two were a big part of me growing up, looking at those as role models."

The way with which Mount moves across the pitch and the precision in his passing makes him special and unique.