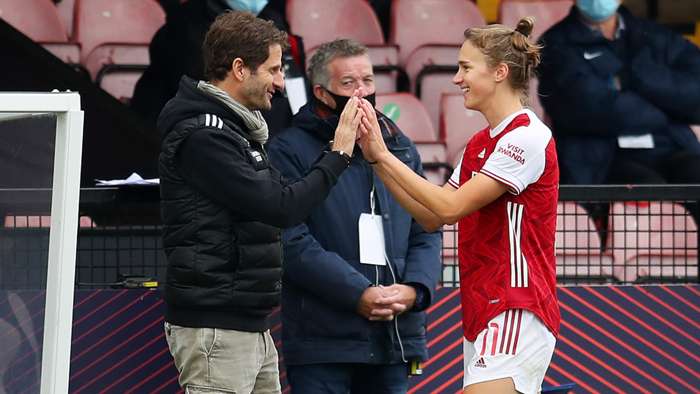 It was just the latest record for the 24-year-old, who is already her country’s all-time top-scorer, and her manager believes there is even more to come.

"Her ability to be better is there. She can get better. She's a person who wants to get better, she wants to challenge herself, she wants to be even better, because there's still a lot of learning and development to go," he said.

“I'm enjoying working with her and having her as part of the group, and as long as Viv's smiling we'll keep seeing a better Viv.

“We see from a football perspective, week-by-week, the contribution Viv makes as a footballer, but I’m blessed and lucky to be a part of her everyday scenario.

“She is an amazing person there for the team, a team player. I’m blessed to have 23 players that work for each other.

“The thing that was enlightening during the game was the players injured who were sat behind me, their energy and encouragement for the players, and Viv is a part of that. Off the ball she is also an amazing person.

“It’s great to see her have the freedom and opportunity to be part of our attacking part and she gets the reward for it.”

After setting that scoring record, there is likely to be no slowing down for Miedema, who has 10 goals in her first five league games this season now.

The forward signed a new long-term deal with Arsenalin December 2018 and has since gone on to prove herself as one of thebest players in the world.

Montemurro says the club plan on talking to the 24-year-old about a new deal very soon, adding: "It's something that we'll start to do very, very early - around November.

“We already start to look at where we're heading with the direction of next year and years to come, but obviously Viv will be on top of that list and we'll do everything we can to make sure Viv remains a part of the group.