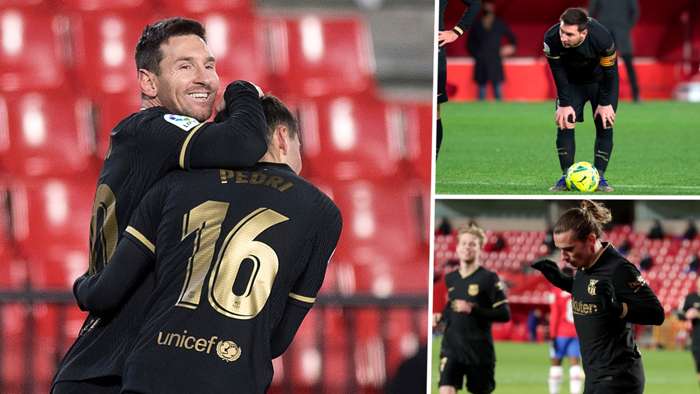 Recent events in the United States suggest 2021 could be just as surreal as 2020 but it seems that a semblance of normality could be returning to La Liga. Along with the real Lionel Messi.

A brace in Bilbao on Wednesday night was followed by a double against Granada on Saturday evening, as third-placed Barcelona cruised to 4-0 win that draws them to within four points of leaders Atletico Madrid.

Diego Simeone's side have three games in hand on the Catalans but that's besides the point, for now at least. Barca will merely be buoyed by the fact that Messi's smile is back.

Messi never really went away, of course. He remained Barca's best player even during their worst performances.

But he undoubtedly looked down during the first half of the 2020-21 campaign. He also lacked precision, which was remarkable for a player long renowned for placing – rather than powering – the ball into the back of the net.

There has never been any lack of effort on his part. He's still been peppering the goal with shots; it was just that not many of them were going in.

Messi was relying on penalties to find the back of the net. Not anymore, though.

He side-footed home two goals at San Mames and repeated the feat at the Nuevo Los Carmenes to take his tally for the Liga season to 11, which is not bad for a supposedly disinterested player in a struggling side.

Barca, though, looked like an impressive unit against Granada, a team finally finding their feet under Ronald Koeman.

Encouragingly for the Dutch coach, Antoine Griezmann had one of his best ever games in a Barca shirt.

Deployed alongside Messi and Ousmane Dembele in what is, on paper, a formidable forward line, Griezmann opened the scoring with a calm finish 12 minutes in, after a Sergio Busquets pass was fortuitously deflected into his path.

The France international then teed up Messi to make it 2-0 before getting his second of the game midway through the second half, when he again fired home with the minimum of fuss after being picked out in the area by Dembele.

If Griezmann belatedly gets going, Barca really will believe that they can overhaul Atletico and second-placed Real Madrid at the top of the Liga standings.

Messi, though, will, as ever, be decisive. His state of mind will be key during the second half of the season and he was beaming after slotting home his second goal of the game: a clever free kick into the bottom-left corner of the Granada net, after the hosts had protected the right-hand side by placing a man behind the wall.

Cynics may well suggest that it's no coincidence that the No.10's rediscovered his shooting boots now that he's free to talk to other clubs over what is likely to be the biggest contract in football history.

Maybe he's already decided his future. Maybe the weight around his shoulders has been lifted. Or maybe thanks to an upturn in recent results, and exciting young talents such as Pedri, he believes Barcelona are finally moving in the right direction again.

Whatever the truth, he's clearly enjoying his football again, and that's good news for the Blaugrana.