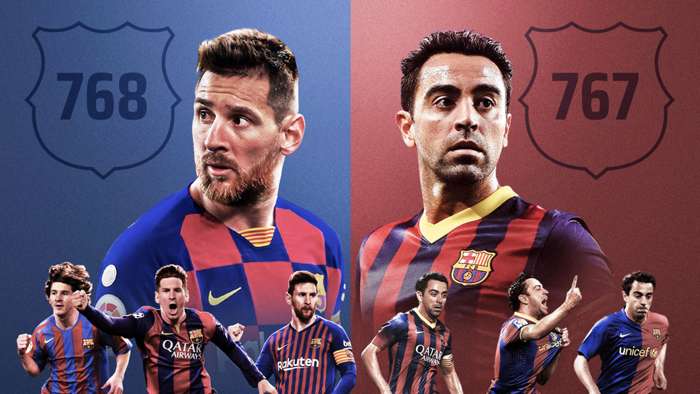 Lionel Messi has written himself into the history books once more after moving clear at the top of the list of Barcelonas all-time appearance makers.

Just under a week after drawing level with fellow Blaugrana legend Xavi against Huesca, the Argentine has now taken the outright record for the Catalans with his start against Real Sociedad marking his768th for the club.

If Messi does not sign a new deal in the summer, his Barcelona career will come a close - but he would depart with a series of records that may never be challenged.

The 33-year-old Argentine surpassed Xavi earlier in the season on Barca’s list of appearance-makers in La Liga alone, but the encounter with Real Sociedad takeshim to the top of matches played in all competitions.

Unsurprisingly, he has played more games in La Liga than any other competition. His appearance against RealSociedad takeshis domestic league total to 511- with 149Champions League games, 79 in the Copa Del Rey, 20 in the Spanish Super Cup, five in the Club World Cup and four in the European Super Cup completing the numbers.

Messi, who made his debut for the club in 2005, stands above all Barca players in terms of goals scored, as he has 661to his name - some 429clear of second-placed Cesar Rodriguez.

As well as goals and appearances, it is no surprise that Messi tops the list of players to have won the most trophies for the club. He has 34 to his name, with Barca pushing to increase the tallyin La Liga and the Copa Del Reythis term.

The pair forged a close bond during the glory years that saw Barca plunder Champions Leagues and Liga titles.

Messi is a six-time Ballon d’Or winner, and Xavi rates him higher than anyone else who has played the game.

“Ronaldinho is at the level of the best, perhaps what he lacked was consistency," Xavi said. "Perhaps he lacked consistency in being at his peak. For me, only Messi is above Ronaldinho because of the consistency of the last few years. Messi is the best in history.”

Messi is not known for long speeches in front of the media, but what he said about Xavi was telling - given the talent in Spanish football.

“He is the best player in the history of Spanish football,” Messi said of his former team-mate.