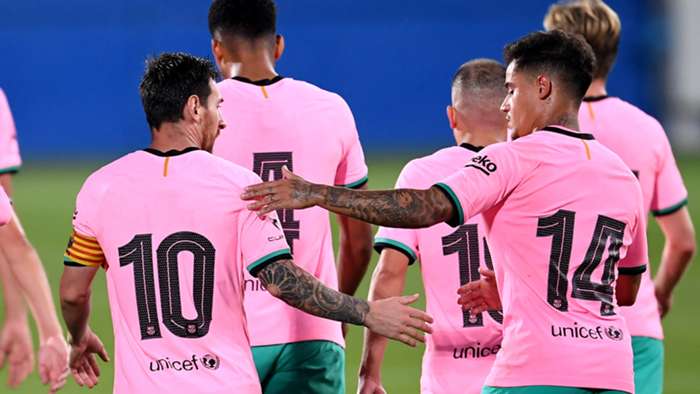 At one stage, both Lionel Messi and Philippe Coutinho probably didn't see themselves playing for Barcelona this season,butthey now look set to star for the club moving forward.

Over the weekend, Coutinho struck from the spot in a 3-0 win over Tarragona before he backed that up on Wednesday with a simple finish to open the scoring against Girona.

The Brazilian's opening goal was the product of a fine team move designedby Messi, who foundFrancisco Trincao expertly with a through ball into the box which allowed the youngster to square a ball across goal for Coutinho.

Just before half-timeCoutinho would then pass to Messi just outside the Gironabox with the Argentine scoring courtesy of a delightful, curling effort.

Messi would add a thirdin the 51st minute courtesy of a deflection, and though Barcelona would make sweeping changes after the hour mark, Koeman's side would stroll to a 3-1 win.

Despite bothplaying just 63 minutes on Wednesday, Coutinho and Messi dominated statisticallyin the final third to give Barca real hope of a flourishing partnership this season. Messi attempted a game-high five take-onsto show he's lost no confidence, while Coutinho created a game-high three chances that included his assist.

In both friendlies, Koeman has deployed a 4-2-3-1 formation that has seen the attacking four routinely swap positions -a principle their Dutch manager hinted will be key for how he wants to play.

"My opinion is to have the best attack we can put on the pitch and some players, they can occupy different positions," Koeman said after the Girona win.

Coutinho returns to Camp Nou high on confidence after winning the Champions League with Bayern Munich and arrives in a Barcelona team that relied to heavily onMessi last season.

The club legend told Goal recently that one of the reasons hewanted to leave was in order to allow new players to shine, but though he remains, there's no reason he can't share the spotlight with someone like Coutinho.

Rivaldo has previously declared that Coutinho's initial struggles at Camp Nou came down to Messi taking "all the credit and responsibility".