McKennies absence and the realities of Covid call-ups: A closer look at the USMNT squad 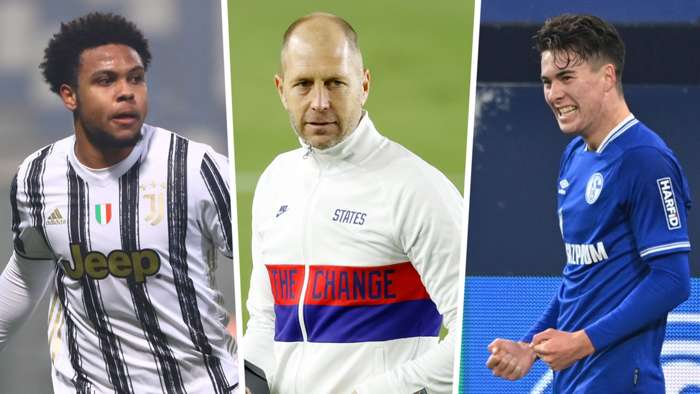 The 26-player U.S. mens national team squad was unveiled on Wednesday, and it features most of the teams top stars.

Christian Pulisic, Sergino Dest, Tyler Adams and Gio Reyna are all in camp, as are youngsters like Yunus Musah, Bryan Reynolds and Daryl Dike.

However, there were some notable absences from the team, as head coach Gregg Berhalter was forced to navigate tricky situations based on club form and the ongoing pandemic that continuesto impact the international game in particular.

One of the notable absences from Berhalters roster was Weston McKennie, a player that is universally seen as a key building block for the USMNTs present and future.

The midfielder has become a key piece at Juventus, who recently decided to exercise their option to permanently sign the now-former Schalke midfielder.

However, as games have come fast and furious at Juventus, McKennie has been dealing with minor injury issues, which led Andrea Pirlo to recently admit that it would be wise to rest the American star.

Those injury issues led to his exclusion from this squad, as Berhalter believes that McKennie is past due for a little bit of rest.

"Weston McKennie, Im sure you guys noticed, wasnt on the roster," Berhalter said."He was omitted from the roster because of a slight injury that hes been dealing with. And if you could imagine, guys at his level playing Champions League, playing league games, three times a week having games, it takes a toll.

"Hes getting used to that. His body isadapting to that level of competition, and, unfortunately, wehad to rule him out for this camp as he goes through further investigation."

McKennie isnt the only expected call-up to miss out on Berhalters squad, as there were several potential inclusions that were left out simply due to the realities of their current situations.

Due to government regulations, players travelling from certain countriesface mandatory quarantine periods upon their return to their respective clubs.

As a result, Berhalter had to work through those situations when it came to assembling his squad.

One such example is Werder Bremen forward Josh Sargent, who is one of seven players that will leave camp early due to government regulations.

Knowing that, Berhalter plans to give Sargent, who hasnt been with the team in roughly a year and a half,an extended run-out in the first game against Jamaica.

That means that strikers in similar situations, like potential newcomers Matthew Hoppe and Jordan Siebatcheu, wouldnt be promised an appearance.

With that in mind, Berhalter opted to leave them and several others behind as he didnt want to call in players that wouldnt get a chance to play.

"Its highly likely that our striker will play 90 minutes in that game against Jamaica, and well have to make six other changes and [Hoppe] wasnt going to get on the field," Berhalter said.

"I had discussions with them, and I talked about his progress at Schalke, I talked about some of the things we really liked with him. And I also told him thatwere going to continue to monitor him, andhopefully get a chance to look at him before the World Cup qualifiers start.

"Other guys that you could be thinking of are Jordan Siebatcheu, hes another one thatwas going to have issues going to the UK. So again, we looked at the likelihood that he would get on the field in this game, and we didnt think it was likely.

"Another guy that came to my mind is a guy like DeAndre Yedlin,a very similar case right where he can only go to one of the games. So this was a juggling act, this roster, and I wouldnt read into the guys that werent on the roster because of the extenuating circumstances behind the roster."

While the majority of the roster is European based, as expected, there were a few MLS players that were selected to make the trip.

Kellyn Acosta,Sebastian Lletget and Aaron Long will travel to Europe after participating in January camp, joining Daryl Dike, who has since made the move to Barnsley on loan.

The decision to bring in that trio was simple, Berhalter said. They were called up because he sees them as important players to his main group, which is largely European based.

"Our focus in this camp was to bring in the best possible roster that we can and that certainly includes you know Aaron Long, Sebastian Lleget and Kellyn Acosta," Berhalter said. "At this time, you could add Paul Arriola and Jordan Morris to it, although theyre on loan with Swansea but theres certainly a contingent of MLS players,Matt Turner, you can add to this as well.

"The objective was to get our best possible team and preparations for Nations League, and these guys are in it."

While Long and Lletget have been in the picture for quite a while, Acostas return is one big surprise.

The Colorado Rapids midfielder was a regular for the U.S. from 2016 to 2018, but has only featured in January camp since.

Now, though, Berhalter says hes firmly back in the picture and has a chance to become a regular once again as the U.S. marches towards Nations League, the Gold Cup and, most importantly, World Cup qualifiers.

"He is, to me, a really great example of a guy just plugging away, continuing to improve, continuing to stay focused," Berhalter said of Acosta. "He just went about it by playing really well for his club.