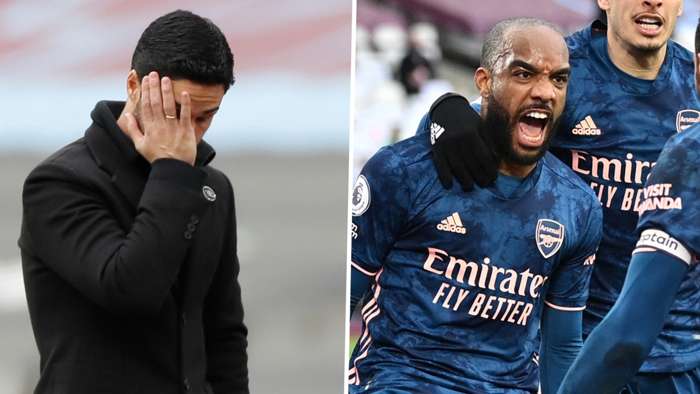 From the ridiculous to the sublime.

If ever there was a game that summed up the inconsistency that plagues Arsenal, this was it.

For 32 minutes they were atrocious at West Ham,heading for one of their most embarrassing defeats in recent years as they fell 3-0 behind.

They then spent the next hour righting their considerable wrongs, and in the end will feel disappointed that they only salvaged a point from a thrilling 3-3 draw.

As bad as they were for the opening third of the contest - and they were truly awful - Mikel Arteta’s side were excellent after that, with Calum Chambers and Martin Odegaard the two exceptional performers.

It was Chambers who crossed for Alexandre Lacazette to start the comeback, with the France striker’s powerful drive on the turn fizzing past Lukasz Fabianski via a crucial deflection off Tomas Soucek.

Chambers then produced another expert delivery on 61 minutes which was turned into his own net by Craig Dawson to make it 3-2.

By then the Gunners were sensing blood, andthey got themselves their equaliser eight minutes from time when Nicolas Pepe picked out Lacazette with a delicious cross that the frontman emphatically headed into the net.

At that point you felt the visitors would actually go on and win it, and they had a chance when Pepe shot straight at Fabianski, but in the end they had to settle for point.

It isa draw they certainly would have takenafter 32 minutes, when they found themselves 3-0 down and staring squarely at an embarrassing defeat after a truly horrific start.

Arsenal have served up some atrocious football at times this season, especially during that miserable run in October and November, but nothing quite as bad as what we saw during the opening stages at the London Stadium.

From the first minute, when they conceded a corner, they were second best, and when Soucek prodded Michail Antonio’s header past Bernd Leno just past the half-hour mark to add to earlier strikes from Jessie Lingard and Jarrod Bowen, the visitors were in utter chaos.

The way they responded certainly deserves real credit, but that opening half an hour was a clear indicator of the work that still needs to be done in north London.

Arsenal were atrocious, and if they are to go on and salvage anything from this season, then they cannot afford to play as badly as that again.

They now sit nine points adrift of the top four in the Premier League and four off the top six, with their hopes of earning a spot in the European places diminishing with every dropped point.

Arteta’s side have been much improved since the turn of the year and showed just how good they can be when they completely dominated Tottenham in the north London derby seven days ago.

But as they good as they were against their neighbours last Sunday, they were abysmal during the opening stages at the London Stadium and they have to cut that out of their game.

While the players must shoulder a lot of the blame for the way they started the match, the manager has to take responsibility as well.

Arteta opted to start with Lacazette as the central striker, but for some reason he decided to move captain Pierre-Emerick Aubameyang out to the right-hand side of the attack.

It isa tactical decision which failed miserably and one Arteta soon corrected, but by then his side were already two goals down.

The Spaniard shifted Aubameyang to the left and Bukayo Saka to the right, and the latter was much improved once he was back in the role he has occupied so impressively during the past few months.

Aubameyang, however, remained a passenger and was incredibly fortunate not to be substituted at half-time, with Pepe and Gabriel Martinelli sitting on the substitutes bench.

Arsenal’s captain was eventually replaced 10 minutes from full-time and watched from the touchline as Lacazette made it 3-3 seconds later.

It was a goal that rescued a point for Arsenal and one that sparked wild celebrations from the visitors.