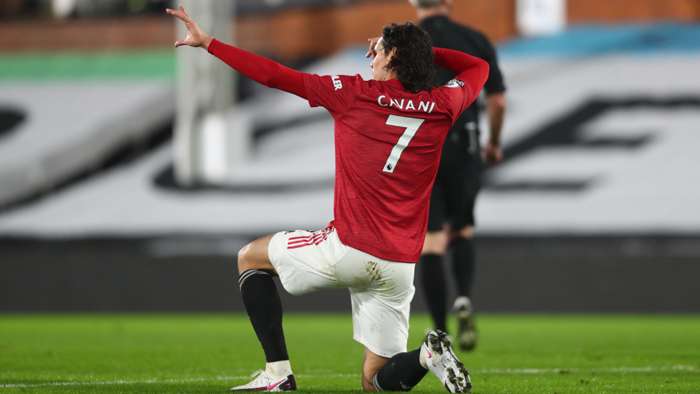 Manchester United frontman Edinson Cavani has revealed the story behind his trademark goal celebration after his latest strike against Fulham.

The 33-year-old striker had been without a club since leaving Paris Saint-Germain three months earlier, where he scored 200 goals in 301 games over the course of a trophy-laden seven-year spell.

He hasn't been quite as a prolific during his first season at United due to the fact he has been mainly used as a substitute, but Ole Gunnar Solskjaer has quickly grown to trust a man who has made a career out of sniffing out opportunitiesin the final third of the pitch.

Cavani has hit five goals in 17 outings across all competitions for the Red Devils so far, with his latest strike coming in a 2-1 win away at Fulham on Wednesday night .

The Uruguayanled the line after being handed his fourth Premier League start of the season and capped an impressive overall display by capitalising on an error from Cottagers shot-stopper Alphonse Areola to tap into an empty net.

Cavani marked the momentby adopting his hallmark archer pose, which has always been seen as a clever metaphor for his deadly accuracy in front of goal.

However, the former PSG star has now explained that the celebration has a deeper meaning relating to his one-year-old daughter India.

“It’s a bit of a long story and it’s kind of wrapped up in our country’s history, and the indigenous population, the Charrúas,”Cavani told the United Review .

“When my little daughter, India, was born, her name is just a small reference to our native Uruguayans, the Charrúas.

“So that arrow that I take out and then fire, is a goal celebration that sort of encapsulates all these things: a mix of my daughter’s name and the indigenous peoples of my country.

“It has a special meaning, but like you say, Eric reminded me of it, even though at the end of each celebration, I always make sure I take out the arrow and fire it.”