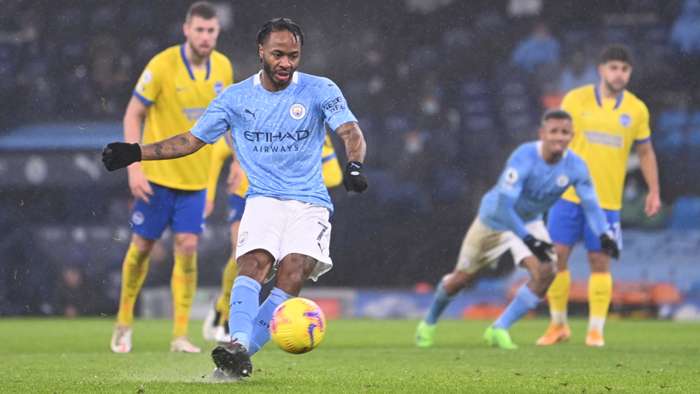 Raheem Sterling continued his poor run of penalties on Wednesday, becoming the first Premier League player in more than three years to miss three in a row.

City held that lead untilstoppage time, when Sterling was given a chance to seal the game from the spot after Brighton goalkeeper Robert Sanchez brought down Kevin De Bruyne in the box.

But Sterling stepped up to the spot and blazed over the bar, his third consecutive penalty miss in the Premier League.

The England international becamethe first player to miss three consecutive Premier League penalties since Saido Berahino did so between April 2016 and September 2017.

Overall,Manchester City have missed seven penalties in the Premier League since the start of last season, more than any other side.

City still managed to hold on for a 1-0 win, the club's fourth straight victory in the Premier League and eighth straight match without defeat.

Pep Guardiola's side have turned things around after a slow start to the season, and now have as many wins in their last four outings as they had in their previous 11 in the Premier League(W4 D5 L2).

That run has City up to third place in the table, four points behind table-topping Manchester United but also with one fewer game played than their city rivals.

Brighton, meanwhile, slipped further into relegation trouble and now sit in 17th place – just one place above the bottom three.

Speaking after the game,Brighton boss Graham Potter said he was still happy with his side's effort despite the loss.

"We are disappointed to come away with nothing," Potter told the BBC. "We met a top team. I’m so proud of the players. You have to suffer here, that’s how it is. We tried to attack.

"You’re always on the stretch because they have fantastic players. They’re so good, they drive you back. Our intention was to be on the front foot and play and attack when we could.

"The boys defended well when they had to and left everything on the pitch which is all you can ask. You need everything to go your way if you’re going to get anything here.