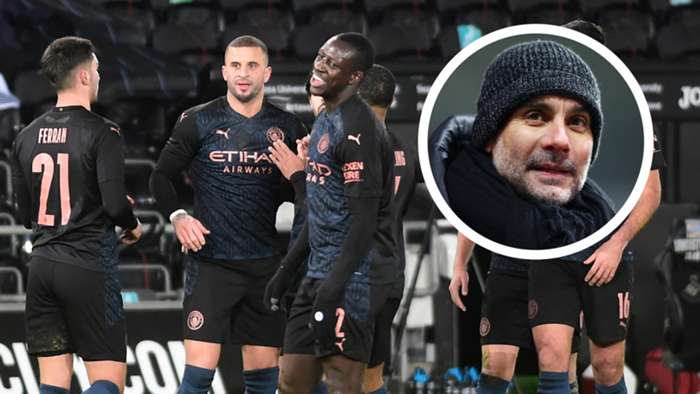 There are no limits to what Manchester City can achieve when they play with this style and menace.

The last time Pep Guardiola's sidelooked this unstoppable, they did what no team had done before and won every trophy available in English football.

It isnot impossible to think that they could go one further by adding the Champions League and completing a quadruple this term.

Wednesday's3-1victory over Swansea City in the fifth round of the FA Cup was their 15th win in succession, and set a new English record for consecutive wins by a top-flight club.

Back in the 2018-19 treble-winningseason, City won 14 on the bounce - although the Carabao Cup final victory over Chelsea only counts as a draw as thetrophy was won after a penalty shootout.

That proved to be the first of three pieces of silverware secured in the space of four months,and the similarities to that season are ominous for City's rivals.

Guardiola's current City incarnation have that same of air of invincibility that gives them the belief that every time they step onto the pitch, they will leave it as winners.

Swansea came as close as anybody to stopping them during their last historical campaign,with City needing Sergio Aguero's last-minute header secure a 3-2 victory in the quarter-finals of this competition.

This season under Steve Cooper, the promotion-chasing Welsh side had only been beaten at home once all campaign, but they simply could notlive with City's quality this time around.

City dominated the first half, with Ferran Torres and Gabriel Jesus both having goneclose before Kyle Walker's low cross on 30 minutes dribbled past everyone and into the net.

The game was then essentially killed off inside five minutes of the second half. First Sterling escaped the Swansea markers to drill in a second before Jesus superbly controlled Bernardo Silva's headed pass to smash home a third and secure a 200th win for the club since Guardiola took charge.

Swanssubstitute Morgan Whittaker did at least score a consolation, but by thenthe in-form Ilkay Gundogan, Sterling and Bernardo had been taken off for a rest, while first-choice centre-backsRuben Dias and John Stones did not even travel fromManchester.

The strength in depth Guardiolapossessesis far greater than at any other point during his City reign, with the likes of Aymeric Laporte, Benjamin Mendy and Eric Garcia among those handed a rare start at the Liberty Stadium.

Factor in that Sergio Aguero and Kevin De Bruyne are both closing in on their own returns from illness and injury, respectively, and there truly is not an area of the pitch that Guardiola will be all that concerned about right now.

Though a serial winner, the Catalanis far too wise to get carried away with talkof league titles or quadruples.

Jurgen Klopp and Ole Gunnar Solskjaer may be talking down Liverpool and Manchester United's challenges, but the City boss insists that an upcoming keague schedule against top-half sides such as Tottenham, Everton, Arsenal, West Ham and United themselves could quickly turn their Premier League season on its head.

Spurs, meanwhile, will likely prove a major test in the Carabao Cup final while the return of the Champions League at the end of the month will only add to an already packed schedule.