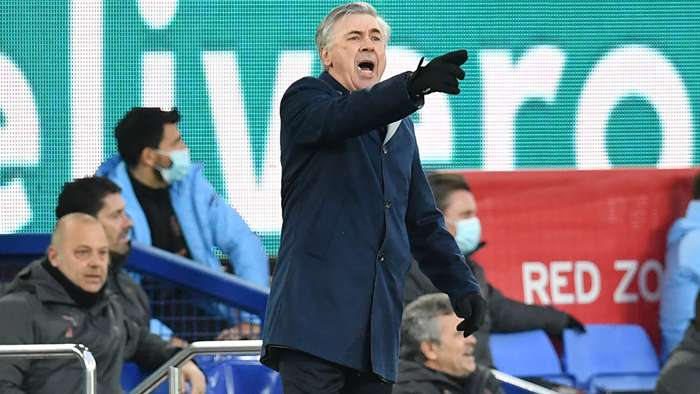 Everton boss Carlo Ancelotti was gracious in defeat after seeing his side lose out to Manchester City, labelling the Premier League leaders as the "best team in the world."

The Merseysiders managed to keep City under wraps for more than 80 minutes of Saturdays FA Cup quarter-final at Goodison Park.

But late goals from Ilkay Gundogan and Kevin De Bruyne sent the visitors through with a 2-0 win, keeping alive their hopes of winning an unprecedented quadruple this season.

"We were almost there, we did well and we did the best that we can do. We defended well and for at least 80 minutes, we had the game under control," Ancelotti toldBT Sport after the final whistle on Saturday.

"I am satisfied because we were beaten by the best team in the world - they are the best.

"We wanted tokeep them uncomfortable. Of course, they are comfortable with the ball but we defended well and we didnt concede space. We played the game that we wanted to play.

"They have the best bench in the world. It was a good experience for us and there are no regrets.

"The regrets are the games against Burnley or the game against Fulham, but we are on time. We have 10 games in the league and we want to fight for our position in Europe next season."

With Saturdays win, City gave another demonstration of their ability to fight on multiple fronts without letting their foot off the accelerator.

Pep Guardiolas men hadalready booked passage to the Champions League last eight with victory over Borussia Monchengladbach, with another Bundesliga club awaiting in the quarters in the shape of Borussia Dortmund.

In April, meanwhile, they will take on Tottenham in the Carabao Cup final as they look to take the title for a fourth straight year.

City also enjoy a 14-point lead over Manchester United at the Premier League summit, an advantage which looks to be unassailable with more than three-fourths of the 2020-21 season already completed.

United did at least end their rivals incredible run of results earlier in March, defeating City 2-0 after they had tallied21 consecutive wins and 28 games without defeat in all competitions.