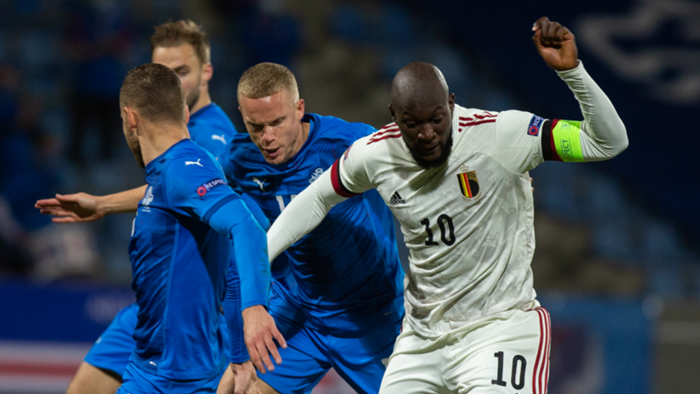 Romelu Lukaku paid tribute to stand-in Iceland coach Arnar Vidarsson despite a defeat to Belgium that saw them relegated from Nations League Group A2.

Hosts Iceland perhaps deserved a point after pushing for a second equaliser after half-time, subjecting the world's top-ranked side to a tense finish midweek.

Despite their demotion, Iceland's performance was made all the more remarkable by the absence of their usual coaching staff amid coronavirus measures.

With head coach Erik Hamren and his assistants in quarantine, Under-21s boss Vidarsson flew in to lead the side.

Vidarsson spent the majority of his playing career in Belgiumwith Lokeren and Cercle Brugge, however, also taking coaching roles with both clubs and therefore having an insight into the away team.

Lukaku told VTM: "I have to congratulate coach Vidarsson. He set his men up very well today. Okay, he knows us very well, but he made it a difficult match for us tonight."

Vidarsson, who won 52 caps for his country, lives and previously played in Belgiumwas well equipped for his unexpected role on Wednesday but admitted the experience was both draining and thrilling.

"I haven't slept much and it has been an interesting 24 hours but fun,"Vidarsson said post-match.

"The game plan was well set up and us stand-ins were comfortable with following it. We are proud and the boys can be proud of themselves.

"Overall, the performance was decent, but we wanted to get the equaliser in the end.

"We won an important game against Romania last week that was our priority.Tonight it is just a nice experience and opportunity to compete against the best in the world.”

While Iceland will finish bottom of the group, Belgium regained top spot courtesy of defeat for England – winners against Roberto Martinez's men last week – at home to Denmark.