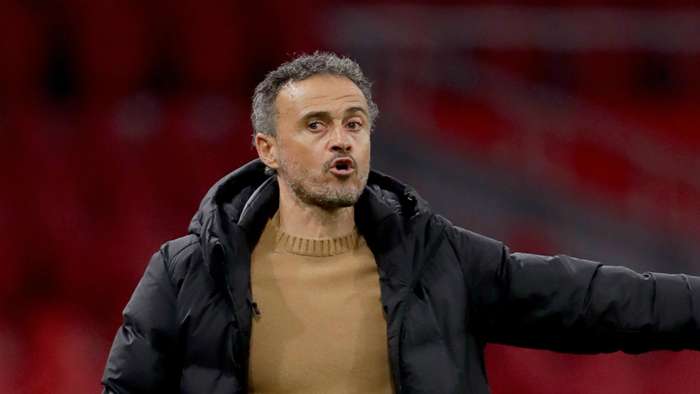 Spain head coach Luis Enrique appeared to be unaware his side played the final portionof Saturday's match against Switzerland with a man advantage.

Spain were heading for successive Group A4 defeats before substitute Gerard struck to cancel out Remo Freuler's first-half opener in a game that saw Sergio Ramos miss two penalties.

Nico Elvedi fouled Alvaro Morata in the box to give Ramos his second penalty attempt in the 80th minute, with the defender shown a second yellow card for the infraction.

However, when Luis Enrique was quizzed about his side's numerical advantage by Marca after the game, the head coach turned to a staff member and appeared to ask "what sending off?" before answering the question.

Having started with Gerard and Alvaro Morata in Wednesday's 1-1 friendly draw with the Netherlands, Luis Enrique reverted back to his striker-less system at StJakob-Park by recalling Dani Olmo to lead the line.

It was ultimately Villarreal striker Gerard who made the difference for Spain as he got on the end of Sergio Reguilon's left-sided cross and clinically converted from seven yards out –one of 20 shots the visitors attempted.

Luis Enrique's side have scored three goals in their pastfive games but the coachhas stood by his decision to leave out the likes of Morata and Gerard in Basel until the second half.

"Soccer can be like this," he said. "It is a wonderful game but sometimes it does not do justice. A lot of things happened and we tried to play our style.

"We felt thata number nine was not going to be necessary in the first half. We lacked a bit of freshness but I think Switzerland were good.

"We lacked when it came to the most difficult thing –scoring. On the basis of the first half we deserved to win, and on the basis of the second as well. It is easy to say after the game that Morata had to play or Gerard should have played."

Spain have taken one point from their pasttwo Group A4 matches, having lost 1-0 to Ukraine last month, and now face Germany – one point better off after beating Ukraine 3-1 on Saturday –in a final-game shootout for top spot on Tuesday.

"I already have a plan for the Germany game," Luis Enrique added. "We will have to see how the players recover and take that into account.

"But we now know that we need to win or be out, as if it was a knockout game in the European Championship."

Arguably the biggest selection call of all, however, was Luis Enrique's decision to bring inUnai Simon over benched pair David de Gea and Kepa Arrizabalaga in goal for the second match running.

Simon made two saves but was well beaten for Freuler's opener and was caught out in the second half when racing way off his line and failing to get the ball, with Ramos getting back to block Haris Seferovic's shot on the line.

Asked to explain his goalkeeping pecking order, Luis Enrique said: "I have always declared that I am happy with all three of them.