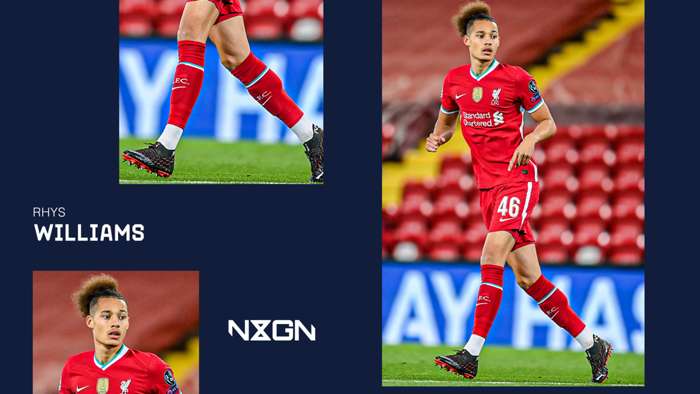 Williams’ rise has been as rapid as it has been unexpected. Injuries may have given the 19-year-old his Liverpool first-team chance, but courage, dedication and hard work are what put him in the frame in the first place.

There are plenty of teenagers who would have recoiled when asked if they fancied swapping the safe, cossetted world of academy football for a season in the sixth tier of the English pyramid.

When your meals are cooked and your kit is washed and your life is planned, the idea of midweek trips to Guiseley and Alfreton and King’s Lynn, of elbows in the face and abuse from the terraces, can be a tough sell.

Williams, though, chose exactly that in the summer of 2019. And his season on loan with Kidderminster may well prove to be the making of him.

“He embraced it and enjoyed it,” says Russell Penn, one of three managers Williams had during his eight-month stint in the West Midlands. “And he was better than anything we’ve ever seen at this level for his age. He's the best loan we've had.”

It was a move that surprised plenty within the game. Not many Liverpool players get sent out on loan to non-League clubs. Fewer still go there and excel.

Williams had impressed at Under-18 level, winning the FA Youth Cup with Barry Lewtas’ side, but it was decided that a new type of challenge was required if he was to kick on.

He needed to play games, that much was clear. And with Ki-Jana Hoever, Morgan Boyes and new signing Sepp van den Berg available for Neil Critchley’s U23 side last season, that was likely to prove tricky.

Just as importantly, though, Williams needed to be in an environment that would test him, expose his weaknesses. He needed the adult world; exposure to aerial duels, defending his penalty area, the physicality ofrough-and-ready centre-forwards, the pressure of men’s football, playing for points and bonuses.

Kidderminster came about because their then-manager, John Pemberton, knew Nick Marshall, Liverpool’s assistant academy director, from their time together at Nottingham Forest.

Together with Alex Inglethorpe, the academy manager, and Julian Ward, the head of loan pathways and football partnerships, a plan was concocted. Williams would move to Aggborough until January, with a view to extending the deal if all parties were happy – which, it turned out, they were.

It was a difficult start for the youngster. He made mistakes and he took criticism. “He was always on the floor,” remembers Penn, who had moved from assistant manager to manager by the time the season was curtailed in the spring due to the coronavirus crisis.

On the field, he was serving a hell of an apprenticeship as well. He was sent off against Brackley Town, suffered a broken nose in a defeat up at Darlington and picked up a black eye against Chester. The National League North, it quickly transpired, is no respecter of reputations.

“People look at you as a big lad and think ‘Oh, it’s going to be easy for him,'” Williams told LFCTV recently. “But it’s a big jump from U18s football.

“You’ve got big blokes jumping with you from the side with their arms up and stuff, and you’ve got to learn to protect yourself. Some of them were trying to leave one on me, make a statement against the kid from Liverpool who has come into non-League, but I never let it faze me.”

Liverpool would check on his progress regularly. Ward attended games with academy coach Tim Jenkins, while Critchley too would make the effort to get out and see him. They were impressed at how quickly he learned, how he toughened himself up and worked on his timing and his aggression, how he found his voice in an experienced dressing room, how he bought into each and every challenge.

"He was all in," remembers Critchley, now in charge of League One side Blackpool, "and that stood out a mile."

Kidderminster had three different managers in Williamstime there. Pemberton, the former Leeds defender, left in November, while his replacement, ex-West Brom boss Jimmy Shan, departed for Solihull Moors in February. Penn, his No.2,was in charge when the season was ended.

He would have had him back for this campaign too, but it was quickly apparent that was a non-starter. "We enquired about him," Pennjoked recently, "but instead he was going to Ajax away!"

Not quite. The initial plan for this season was for Williams to become the main centre-back for the U23s.With Hoever sold to Wolves, Boyes loaned to Fleetwood and Van den Berg yet to make a big impression on Merseyside, the opportunity was there for Williamsto show what he had learned down at Kidderminster. He signed a new five-year contract in September, reward for his diligence andwillingness to learn.

Liverpool, in truth,were surprised at how little Football League interest there was ths summer, with only League One outfit Plymouth, managed by Scouser inRyan Lowe, making any sort of move.

Theywere, though, happy to retain the player until January, use him at Melwood as and when needed and, in one source’s words, to “see how he swam” back on Merseyside.

Williams has been at the club since the age of nine, developingin the same group as first-teamers Curtis Jones and Neco Williams. It is only in the last few months that the Preston-born centre-backhas emerged as a player with serious first-team potential.

"He's always been a big lad and someone who had a voice," says former Reds youth coach Mike Garrity, Critchley's assistant at Blackpool. "So it's nice to see his development in the last 12 months as a player."

Williams was handed his debut in the Carabao Cup third-round tie at Lincoln in September, performing well alongside Virgil van Dijk, and was even more impressive against Arsenal at Anfield in the following round, when the Reds lost on penalties after a goalless draw.

“Lincoln was more observing me on the ball, because we knew we would have a lot of possession,” he says. “But then going to play against Arsenal, a massive team, that was going to be about what I could do defensively.

“I thought I had a decent game. I enjoyed it.”

Of course, with Van Dijk now injured long-term, and with Joel Matip and Fabinho also sidelined for the time being, the spotlight has suddenly fallen on Williams. Liverpool are short, and the big man is needed.

October has already been manic. He has played for England U20s, appeared off the bench in the Champions League at Ajax, followed that up with a goal for the U23s against Chelsea at Kirkby last weekendand then, this week, was thrust into action for an hour against Danish champions Midtjylland at Anfield. Klopp described his performance in that game as “exceptional”.

“He’s an amazing player,” says Trent Alexander-Arnold, the benchmark for all young players emerging at the club these days, while sources say Williams has already made an impression on the senior pros at Melwood with his talent and personality. They like talkers at Liverpool, and if they can pass the balland head it as well, then even better.

“The only problemwe have now is unfortunately we have four days now until the West Ham game,” said Klopp after the victory over Midtjylland. “And you the media will make a story about him every day!”

Sorry about that, Jurgen, but with games coming thick and fast, we can expect to see plenty more in the coming weeks and months.

Rhys Williams’ chance is here. And who ever would have thought that, just a few short months ago?