'Liverpool deserve the title' - Voiding the season would be 'unfair' on the Reds, says Berbatov 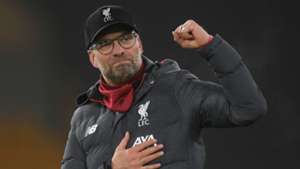 It will be hugely "unfair" on Liverpool if the season is voided and they miss out on the Premier League title, according to Dimitar Berbatov, who thinks the Reds "fully deserve" the trophy after establishing such a big lead at the top of the table.

The 2019-20 season has been suspended indefinitely due to the coronavirus outbreak, which has caused 75,294 deaths worldwide to date.

The crisis looks set to rumble on for at least a few more months, and unless the safety of players and staff can be guaranteed, there is a real possibility that the latest campaign will be cancelled completely.

The enforced break couldn't have come at a worse time for Liverpool, who sit 25 points clear at the Premier League summit with only nine fixtures left to play.

Two more victories would see the Reds pick up a first league title in 30 years, but their efforts could end up counting for nothing, and the wait for an elusive piece of silverware may yet continue for another year.

There have been suggestions that voiding the season is the only rational option if football cannot resume over the summer, but others believe Liverpool have already earned the right to call themselves champions of England.

Berbatov falls into the latter camp, but would ideally like to see all remaining fixtures played out, even though he acknowledges that such a scenario could increase the risk of injuries.

"We are all missing football, it is our religion. I have seen that a couple of players have spoken out asking for a solution," the ex-Manchester United forward told Betfair.

"They have finished the league in Belgium where there was only one game to go, so you can understand that decision, but in the Premier League, there are still nine rounds of fixtures to go.

"I have seen people calling for the season to be void, to give the title to Liverpool and other opinions. Some people are saying their teams could play their remaining fixtures in a couple of weeks, but that can lead to many injuries. I don't know which decision is the right one, whatever is decided won't be so popular.

"People are suggesting to give the title to Liverpool, and honestly, they deserve it the way they had been playing, nobody was going to catch them. With the way they play their games, the football they produced and how far they are in front, they fully deserve the title this season. It's so strange, and it will be unfair on them if the season is voided, they will be so disappointed.

"The people who make the decisions at the Premier League are facing something they have never experienced before, and people are split on what should happen. I would like to see the season finish with football, but obviously people's safety comes first."