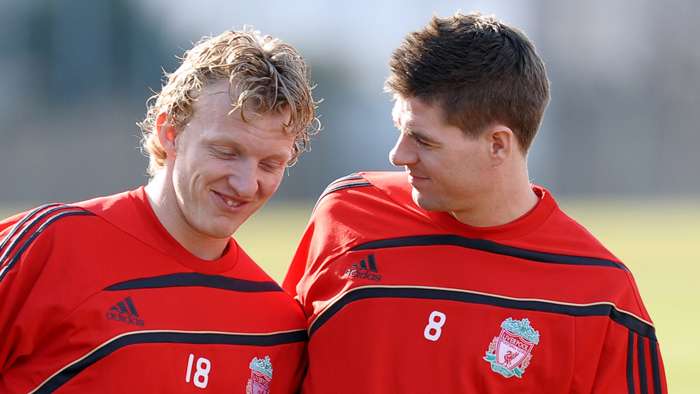 Dirk Kuyt thinks Steven Gerrard’s natural leadership qualities mean he would do “a great job” as Liverpool manager – and the Dutchman would love to be his assistant at Anfield.

Gerrard is revelling in the success of his first job in management, after leading Rangers to their first Scottish title in 10 years.

His title win has intensified talk that he could one day take the reins at Liverpool and Kuyt – who Gerrard invited to spend time with him in training at Rangers – thinks he is tailor-made for the job.

Kuyt told the Mirror: “I feel that his leadership qualities are going to take him very far as a manager. I think it would be great if Steven Gerrard went on to manage Liverpool. He’s Liverpool through and through and spent his entire playing career at Anfield.

“I have always got on very well with him, and we are still in contact from time to time.

“Steven has said some great things about me in the last couple of years, we have a special bond. He does not have to speak about me, but he still does.

“It has made me proud of our bond and it was great to go over to see him work with his team in Scotland.’’

Kuyt became a fanfavourite in his six years at Liverpool, and retired from playing in 2018. He is yet to make the move into management but says he is looking to take his first step soon.

“I have a desire to be a manager soon and I am looking at options,” he said. "But there are exceptions for choosing a path as an assistant manager and being alongside Stevie would be one of them.

“If he wanted me to be his assistant, I’d like that a lot. In principle, I see myself going on to work as a head coach, but, like I say, there are always exceptions.

“The most beautiful moment I can see is when Steven gets the job and can call himself officially the manager of Liverpool.

“And he’d do a great job. As he’s done at Rangers, he will have a process, doing things gradually, step by step.”