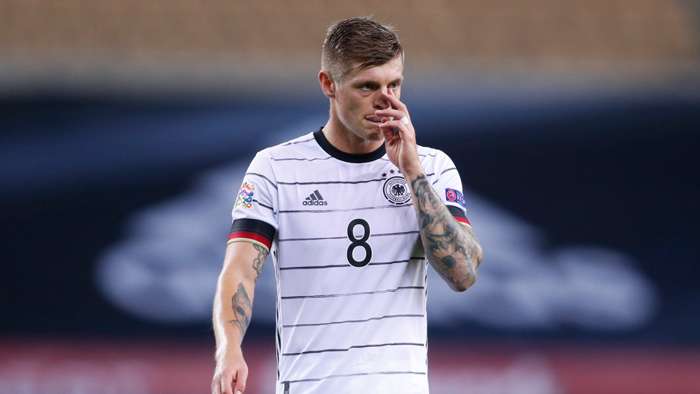 Toni Kroos admitted Spain showed Germany how to play with and without the ball on Tuesday in a historic 6-0 Nations League defeat.

Luis Enrique's side scored three goals in either half and were dominant from start to finish as they ended the match with70 per cent possession and took 23 shots compared to Germany's two.

The defeat was Germany's worst ever competitive losswith the national team having not concededsix goals in a single match since 1958 against France.

More accustomed to winning games in such fashion, Kroos conceded Spain were simply superior in every way and taught Germany an important lesson.

"It hurt. Defensively, we did not get any access at all. Spain showed us how to defend, how to play with the ball and without the ball," Kroos told ARD.

Germany forward Serge Gnabry echoed his team-mate,adding:"Nothing worked for us today, we just couldn't get access. Spain deservedly won even at this level. We tried to push each other. Spain simply did well, we did very badly. Now maybe we know where we stand. That makes us think. We still have a bit of time and have to make the best of it."

Joachim Low's side had previously gone 12 games without defeat, with their last loss dating back to September 2019 when they fell 4-2 to the Netherlands.

Germany have however showed some vulnerability in defence and had kept just one clean sheet in their last eight matches - conceding three goals against both Turkey and Switzerland in high-scoring draws.

It was a night to forget for Bayern Munich goalkeeper Manuel Neuer, who saw his side fall apart in front of him and was left to pick the ball up from his own net six times.

"Quite disappointing for all of us, not only for the defenders, but for each of us," Neuer said.

"We blew the game together today, also the body language and communication was disappointing. We should have spoken more, especially after the first goal. It's very important to support each other."