Klopp's future, Salah sale and summer signings: What happens if Liverpool miss out on Champions League? 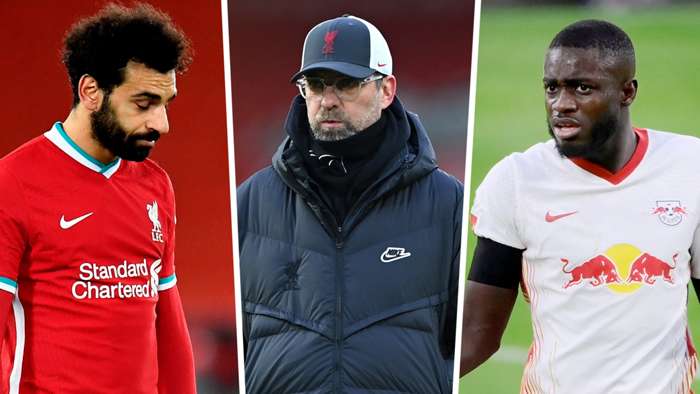 It would have seemed unthinkable just a few weeks ago, never mind back in September when the campaign began.

Jurgen Klopp’s side, champions in such magnificent style last term, are under pressure right now. With just two wins in their last nine Premier League games, their hopes of defending their title are all but over.

And with rivals queuing up behind them, it looks like the Reds will face a battle just to secure a Champions League qualification spot for next season.

The next two weekends, indeed, could be critical. Liverpool visit third-placed Leicester City on Saturday, before hosting Merseyside rivals Everton seven days later. Carlo Ancelotti’s side sit seventh, but are only three points behind and boast two games in hand – that ishow tight things are at present.

“Whoever is in front of us, we will chase them, definitely. There are a lot of games to come, and we will fight for results.”

Klopp’s defiance is understandable, and it is fair to expect his team to improve significantly between now and May.

But he knows, as the club’s owners know, that missing out on that top-four place could have big consequences going forward.

Here are just a few…

Let's start with the bottom line, shall we?

There is never a good time for a club to miss out on the Champions League, but given the uncertainty surrounding the football world at present, to do so this season would be extremely costly.

Since returning to Europe's elite competition for the 2017-18 season, Liverpool have earned close to £275 million ($381m)in revenue. In 2018-19 alone, when they were crowned European champions, they earned just under £98m ($136m), showing just how lucrative a strong Champions League run can be.

But even when exiting at the last-16 stage at the hands of Atletico Madrid last season, their earnings were just over £70m ($97m). This season, having qualified with four wins and a draw from their group, they have already earned more than £30m ($41m), with the potential for more should they edge past RB Leipzig and into the quarter-finals.

"It goes without saying that it would have a huge effect if theywere to miss out," says sports lawyer Daniel Geey, of Sheridans. "And on a number of fronts too.

"Obviouslyon a sporting front, the best players want to be playing in the best competitions, but also because of the way a lot of contracts are structured now. Players will have big Champions League qualification bonuses, and sponsors will too.For example, I'm sure in the Nike kit dealthere will likely be something around Champions League qualification.

"Then you have matchday revenue, broadcast revenue and prize money, which is all affected. In the group stage alone, clubs earn £2.4mfor each victory, which is not an insignificant amount at any time - let alone a time like this, when every club is looking to maximise revenues."

Liverpool announced pre-tax profits of £42m ($58m)and a recordturnover of £533m ($738m) in their most recent accounts, but anticipate significant drops when the latest figures are released later this year.

A study released by KPMG in January showed the Reds' operating profit had fallen by £42m ($58m) due to the coronavirus pandemic - a drop off of eight per cent. Privately, Anfield sources are braced for losses which could reach as much as £100m ($138m), with no sign of supporters returning to stadiums any time soon.

"I think the January transfer window showedhowclubs are feeling the effects," says Geey. "There was a lack of activity compared to other seasons.

"If you look at the latestDeloitte Football Money Leaguereport, that only really covered four months of the pandemic and showed a major impact on revenues for all clubs.So the next set of accounts, which will cover a full 12-month pandemic period, are not going to make for pretty reading at all.

"For a club like Liverpool, who have been established in the Champions League for a good few seasons now, that's why it is so important that they are in there again next season; it's the sponsorship side, the broadcast side, the matchday revenues which we all hope will come back, and it's the ability to be able to attract the highest-calibre players.

"You're talking about potentially removing the best part of £60-80m ($83-111m) from your bottom line, at a time when every penny counts. It's huge.

"Liverpool have a big wage bill, they have big commitments to a lot of elite players, and without that Champions League revenue, they would need to re-forecast their budgets accordingly."

The first thing to say is that Klopp’s position as manager would not be under threat, even if Liverpool failed to secure a top-four finish.

It would, of course, be viewed as a huge disappointment, but Fenway Sports Group, the club’s owners, understand the unique circumstances surrounding this season, and the German has more than enough credit in the bank given his numerous achievements on Merseyside.

Perhaps the more pertinent questions relate to Klopp’s own thoughts. It has been a challenging, draining season for the 53-year-old, both on and off the pitch,and it is no surprise that he has looked worn down by it all in recent weeks.

His contract at Anfield runs until 2024, and Liverpool would love to retain him beyond that. He is seen as the future as well as the present, and shares a strong relationship with the owners, in particular Mike Gordon.

They know what he has done for the club, and appreciate how difficult he will be to replace, in terms of ability, personality and general stature and authority.

There is an acceptance that he wants to return to Germany at some stage. He has said as much, in fact, though he has always insisted that he will take a year away from football when he eventually leaves Liverpool.

He would certainly have no shortage of suitors back home. Bayern Munich will always be keen, while the national team job is one which Klopp has never fully ruled out.

Klopp’s legacy at Anfield is assured, do notworry about that. He will always be the man who brought No.6 and No.19.

But it would be interesting to see how he handleswhat would, in essence, be the first big ‘failure’ of his reign on Merseyside.

One suspects he would relish the fight, in truth, but stranger things have happened.

When Mohamed Salah gave an interview to Spanish publication ASback in December, there were two big revelations.

One was that he had been disappointed at being overlooked by Klopp for the captaincy when Liverpool played Midtjylland in the Champions League.

The other was that although Salah insisted he wanted to stay at Anfield and “break all records”, the matter was “in the hands of the club” -a claim he would repeat when speaking to Norwegian channel TV2 in January.

Many saw his words as an open challenge to Liverpool to come up with a new contract offer, while others felt his refusal to dismiss the idea of a move to either Real Madrid or Barcelona -“they are two top clubs -who knows what will happen in the future?” -was a clear sign that his mind was beginning to wander.

Salah’s Liverpool contract runs until the summer of 2023, and sources have told Goal that the plan has always been to offer an extension to the Egypt star, even if talks are not yet underway.

He will turn 29 in June, and knows that his next contract will likely be the last ‘mega’ deal of his career. His options, though, are not as vast as they perhaps were a couple of years back.

He surely will not be moving to Barca any time soon given their dire financial issues, while Real’s experience with Eden Hazard would make them think twice about spending vast sums on a player of that age.

Paris Saint-Germain, perhaps? Juventus? Bayern Munich? The Bavarians’ chief executive, Karl-Heinz Rummenigge, spoke about Salah earlier this month, branding him “the Lionel Messi of Africa” and stating that “of course he has got the skills to play in the best teams in the world”.

Certainly, were Liverpool to miss out on next season’s Champions League then the situation would be made a lot more interesting. Top players do not view the Europa League with fondness; and players such as Salah, who eye personal accolades as well as team honours, most certainly do not.

Never mind the possibility of losing players, what about bringing them in?

It goes without saying that missing out on the carrot of Champions League football would make Liverpool’s life harder in that regard. They have been able to attract some serious footballers to Merseyside in recent seasons, but that was when they were on the way up. Things are different when the world senses a decline.

There is no chance, for example, that the likes of Virgil van Dijk, Alisson Becker, Fabinho and Thiago Alcantara would have been signed without Champions League football. Liverpool have generally recruited well from lesser clubs, but they are competing with Europe’s top operators now. They need to be dining at the top table.

Signings are certainly needed this summer, no matter how the rest of this season pans out. At least one high-quality centre-back is required, while Gini Wijnaldum will need replacing in midfield if, or indeed when, he departs on a free transfer.

A new forward would be desirable too, with questions over Roberto Firmino’s long-term form.

Freshening things up is vital. A number of key players, including Firmino, Salah, Thiago, Van Dijk, Jordan Henderson, Joel Matip and Sadio Mane, will be either 29 or 30 come the summer, and though there is plenty to come from others,there is still a need for young, hungry players of pedigree, who can continue to carry the fight in the coming years.

We have all seen the calibre of player linked or suggested, the likes of Erling Haaland, Jadon Sancho, Kylian Mbappe, David Alaba orDayot Upamecano.