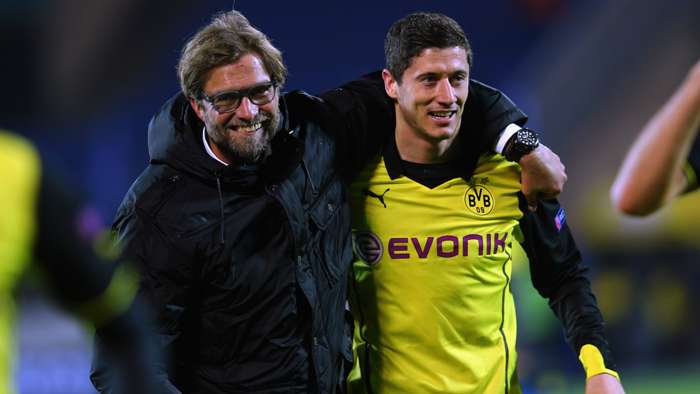 Robert Lewandowski has named Jurgen Klopp as his favourite manager, while describing the Liverpool boss as a man with "two faces" - one of a caring father and one of an authoritative coach.

The Poland international ended up signing for Bayern in 2014, and Klopp made his way to Liverpool a year later to begin the next stage of his managerial career.

Lewandowski spent his first two years at Allianz Arena working under Pep Guardiola, the current Manchester City manager, who boasts one of the greatest coaching CVs in football history.

However, the 31-year-old forward has ranked Klopp ahead of the Spaniard as the best coach he has ever worked with, as he told ESPN:"I think...Jurgen Klopp is my favourite and after that Pep Guardiola. 100 per cent.

"Klopp has two faces. You can see that he is kind of like a father, but the second part is like a coach, a manager. He can tell you everything - and I'm not speaking about the good things - about the bad things.

"Also for players, he is a huge motivation. He makes this perfect, because he knows where there is this line where he can push you more or a little bit less.

"His performance as a coach is amazing, but not only as a coach but also as a man."

Lewandowski is currently enjoying the most prolific season of his career to date, having hit 51 goals in 43 outings across all competitions.

He will be hoping to add to that tally when Bayern resume their latest Champions League campaign with a round of 16 second-leg tie against Chelsea on Saturday.

Hansi Flick's side are gunning for the treble after winning the Bundesliga and DFB-Pokal, and they will be protecting a 3-0 first-leg lead when the Blues arrive at the Allianz.

Lewandowski added on the mood in the Bayern camp ahead of a return to European action: "Chelsea have been playing great, very good. I don't worry.

"We know that we are Bayern Munich and we have big respect for Chelsea. We know we are in good form and we know what happened in the first leg.

"We need to have a good first 20 minutes, but we are fresh after the break since the Bundesliga ended."