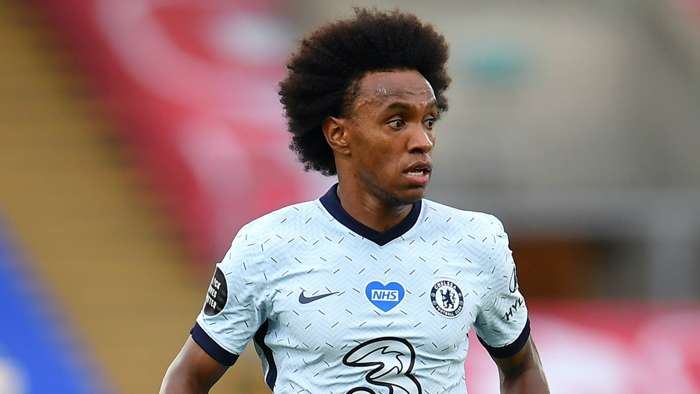 Frank Lampard says Willian is set to decide his own future and the Chelsea boss is ready to accept whatever the winger chooses, whether heleaves or stays at Stamford Bridge.

Willian's agent Kia Joorabchianhas publicly admitted that his client has offers from five clubs. This includes three from overseas sides,an MLS club, understood to be Inter Miami, and two Premier League teams, that are thought to be Arsenal and Tottenham.

Lampard couldn't pick Willian due to injury in the 2-1 FA Cup final defeat to Mikel Arteta's side and the manager explained he can do little to convince him to stay at this stage.

“It is his decision, I haven’t got that answer," Lampard told reporters. "I know the situation at the club’s end. I have a great relationship with Willian, but I don’t actually know what the decision is.

"If that happens over the next whatever days, as he said, then that would be good for me in either way. Of course, I am very happy with Willian. He has been brilliant for me this season with his input and work ethic, within the squad.

"But it is his choice and I respect his choice. He has been a great servant for Chelsea if he decides to move on, and if he does decide to move on then Chelsea will move on and we have to look forwards ourselves.”

Meanwhile, the Blues will step up their efforts to sign new players in the transfer window after it opened on Monday ahead of the club's Champions League return.

After suffering a 3-0 home defeat, it is a tough ask for an injury-hit Chelsea to mount a comeback against Bayern Munich in the second leg of their last 16 clash.

Soon, the Blues will look to tie up a deal for Bayer Leverkusen's Kai Havertz, while they are also targeting Leicester City's Ben Chilwell and West Ham's Declan Rice.

Lampard admittedhe is looking to see defensive improvements as a result of the transfer window, with the manager having already locked up two attacking signings in Hakim Ziyech and Timo Werner.

“Yeah, it’s true," Lampard added. "The numbers don’t lie. We are trying to play a certain way. I know that teams at the top of the game, Liverpool and Manchester City, have been through similar. I’m not saying we are going to get to that level, but similar periods in the early stages of their managers being at the club a few years ago.

"We are conceding too much; it is a work in progress for me. I can’t shelve it in another direction. We have to work defensively as a group. But some of the individual errors we are making, clear individual errors, some today clearly cost us goals, can’t be there if we want to keep moving forward.