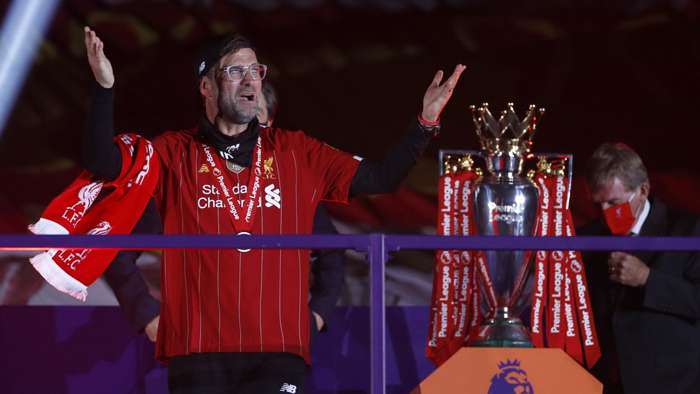 Michael Owen expects the silverware to continue rolling in at Liverpool, with the former Reds striker claiming the only question facing the Reds is “how many trophies are they going to win.”

Liverpool got their hands on the Premier League title after seeing off Chelsea 5-3 on Wednesday, with wild scenes of celebration sparked inside Anfield and around thefootball-mad city.

The challenge now is to maintain the stunning standards that have been set, with the Reds aware of the need to establish another dynasty and avoid being a flash in the pan.

Owen believes many more triumphs will be taken in, especially as charismatic Klopp has been tied down on a contract through to 2024.

The ex-Liverpool frontman told Premier League Productions of the Reds’ highly-rated coach: “The man just gets it. He gets life, he gets the city, he gets how people tick. He’s just the man.

“I find it hard to get impressed by too many people, but that fella, every time he opens his mouth, I can’t stop listening. I think he’s absolutely brilliant.

“You are striving for perfection at the moment. It’s just a matter of how long he can keep this going now, in terms of how many trophies Liverpool are going to win - but I couldn’t speak highly enough of him.

“When you’re playing, you don’t feel the magnitude of what you’ve done. Even Klopp said it’s two or three hours to think about what you’ve done, but I can guarantee that for him it will be a quick holiday with the family and then ‘how are we going to defend it again?’

“Football is a short career, you’re on a hamster wheel in many ways, and as soon as you retire you think ‘I won that, and I won that’. When you’re doing it, it’s relentless. It’s a relentless pursuit of what is next, what can I win next?”