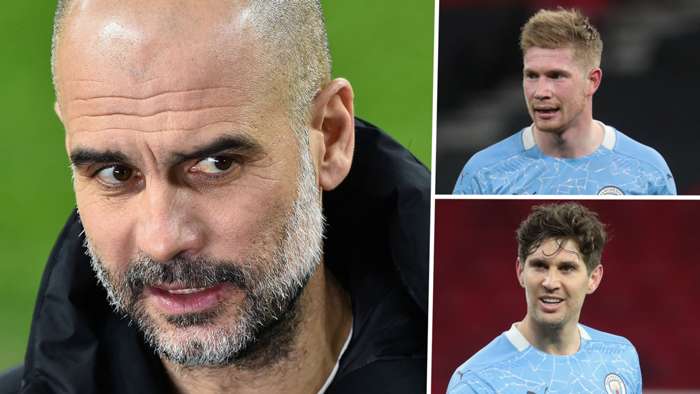 Pep Guardiolas team breezed into the quarter-finals of the Champions League with a ruthless 2-0victory over Borussia Monchengladbach that sealed a4-0 aggregate win.

City were just far too good for the German side, whose form has fallen off a cliff since manager Marco Rose announced he was leaving to take over at Borussia Dortmund in the summer.

A high-energy, relentless performance from City ensured that Gladbachwere not given even a hint of a chance to pull off an upsetin a game switched to Budapest because of coronavirus regulations.

From the moment Kevin De Bruyne smashed in a fierce, 20-yard strike in the 12th minute, the tie was effectively over. City added another goal just six minutes later to make sure, though, withIlkay Gundogan finishing after racing on to Phil Fodens defence-splitting pass.

City could have scored morebut the victory was so comfortable that Guardiola was able to rest players in the second half ahead of Saturdays FA Cup quarter-finalclash withEverton, as City look to take another significant step towards an unprecedented quadruple.

But as impressive as their performance was, the City boss will know very well that the true tests of his sides European hopes are still to come.

Monchengladbach,languishing in the bottom half of the Bundesliga, have now lost seven successive matches for the first time since 1989. They cannot be used to provide an accurate measurement of Citys quality.

Short of confidence and without an attacking threat, their focus quickly switched to damage limitation, making progression a formality for Guardiolas troops.

What happens now is key. City have reached the quarters with Guardiola on three previous occasions -but never gone any further.

City have impressed in reaching the last eight withoutbreaking sweat, sailing through the group stage before their dismantling of Monchengladbach.

It is likely that they will face a genuine Europeanheavyweight in the quarter-final draw on Friday, however, with Liverpool, Paris Saint-Germain and Real Madrid among those already through.

Nonetheless, there are encouraging signs for City that they have developed a style that could finally yield Champions League success against the very best.

Against Monchengladbach, Guardiola went with the same blueprint that proved sosuccessful a year ago when they beatMadrid in the Santiago Bernabeu.

Sergio Aguero was surprisingly left on the bench that night and the City boss filled his side with dynamic attacking midfielders that leftMadrid in a daze during a historic 2-1 victory for the visitors.

A year of injury and illness has left Aguero still working his way backto full match sharpness, meaning he was on the bench against Gladbach, but he probably would have been left out of the starting line-up even if he had been fully fit.

Citys game, and shape, has evolved during the Argentines many and prolonged absences.Citys attacking quintet of De Bruyne, Foden, Gundogan, Bernardo Silva and Riyad Mahrez offersa clever and fluid attackingthreat as they buzz around the pitch, interchanging positions and pulling opponents into uncomfortable positions.

Still, Citywont have forgottenthat the hard work of last seasons win over Madrid was wrecked by the shock last-eight elimination against Lyon, who stunnedCity with their pace on the counterattack.

Since then, Citys back four has taken a huge leap forward thanks to the arrival of Ruben Dias and emergence of John Stones.