'If you're on Zlatan's team and you lose, you’re dead' - Shaw recalls Man Utd training sessions with 'unbelievable' Ibrahimovic 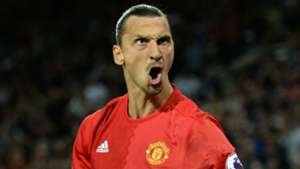 Zlatan Ibrahimovic "got the best out of everyone" during his time at Manchester United, according to Luke Shaw, who says the Swede would never tolerate anyone slacking off in training.

Jose Mourinho lured the Swedish forward to Old Trafford on a free transfer in the summer of 2016, reuniting with the man who helped him win his first Serie A title with Inter seven years earlier.

Ibrahimovic had also enjoyed successful spells at Ajax, Juventus, Barcelona, AC Milan and Paris Saint-Germain prior to his arrival in Manchester, and was able to transfer his impressive form in front of goal to the Premier League seamlessly.

He hit 28 goals across all competitions in his debut season with United, and scored twice in a League Cup final victory over Southampton, while also helping the club on the road to success in the Europa League.

Unfortunately, the 38-year-old was only able to feature in seven matches the following season as he struggled to overcome an anterior cruciate knee ligament injury, and ended up leaving the club in March 2018 to take up a new challenge in MLS with the LA Galaxy.

Shaw recalls Ibrahimovic being ready to "absolutely kill" anyone who failed to pull their weight on the training pitch, and insists the striker was a "great" influence in the dressing room due to his winning mentality.

"He was mad. I think he was what we needed in the dressing room,' the United full-back said during the Combat Corona FIFA Twitch tournament .

"He's unbelievable, he still had the talent and even though he was a bit older he was still the amazing player that he had been.

"But I think inside the dressing room he was great. He had a lot of jokes but I think when it got serious, and when he had to sort of put his foot down, you knew about it.

"I think he was a born winner. Even in little training games, if he didn't win and you were on his team he would absolutely kill you.

"So I think he got the best out of everyone when he was there, as in training-wise, because people couldn't sort of [slack] off because if you're on his team and you lose, you're dead.

"And honestly you can ask anyone in the team, that was the situation. But I think everyone loved him and it was just disappointing that he got that bad injury."