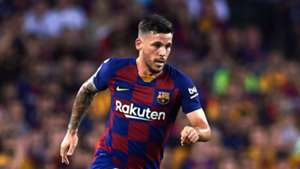 Barcelona "don't have patience with young players", according to Carles Perez, who admits he "didn't understand" why he was sold to Roma in January after spending the early years of his career at Camp Nou.

Perez rose through the famed La Masia academy ranks as a youngster before graduating to the senior squad in 2015, but struggled to establish himself as a regular in the Blaugrana starting XI.

The Spain Under-21 international was restricted to just 27 appearances in total, including seven in the first half of the 2019-20 campaign, and was ultimately deemed surplus to requirements at the turn of the year.

Roma snapped Perez up on an initial loan deal with the obligation to buy him outright for EUR11 million (?9m/$12m) in June, at which point he will commit to a four-year contract at Stadio Olimpico.

The 22-year-old insists he has come to "respect the decision" Barcelona took over his future, but concedes he "didn't understand his exit" at the time, with the club shifting away from their youth policy in order to focus on big-money signings in recent years.

"I'm only thinking about succeeding at Roma," Perez told Marca.

"I have four more years on my contract and I'm focused on that.

"I didn't understand my exit, but I respect the decision and thank the club for their treatment of me over the years.

"People talk about the academy, but sometimes they prefer to spend millions and don't have patience with young players.

"That's how it is. People have to forget my past there."

Roma head coach Paulo Fonseca threw Perez straight in at the deep end upon his arrival in Italy, and the winger has impressed during his first seven appearances for the club, opening his goalscoring account in a Europa League round-of-32 win over Gent on February 20.

Perez went on to express his belief that the passion of supporters in Rome eclipses those in Barcelona, and also shared his admiration for the club's intense cross-city rivalry with Lazio.

"The rivalry with Lazio is impressive," he said. "Football was great in Barcelona, but nothing like what I see every day in this city."