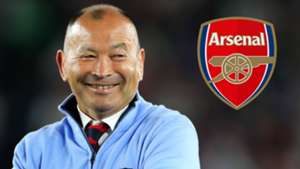 Eddie Jones, head coach of the England rugby union team, has admitted that he would "love to coach Arsenal" as questions are asked of Unai Emery's role at Emirates Stadium.

A Spanish tactician finds himself falling under mounting pressure in north London as the Gunners once again struggle to establish consistency.

It has been suggested that Emery could be on borrowed time, with a number of high-profile figures mooted as potential successors.

Mauricio Pochettino, despite his strong ties to arch-rivals Tottenham, has been added to the pot after being relieved of his duties at Spurs.

Jones, though, would welcome the opportunity to throw his hat into the ring if a crossover opportunity presented itself.

The Australian guided England to the final of the recent rugby World Cup in Japan and is a proven performer at the very highest level.

Quizzed by talkSPORT on whether he would be interested in a prominent football post, Jones said: "I'd love to coach Arsenal.

Jones added: "They've had a few problems, haven't they! That would be fantastic.

"I used to live in north London and I'd go to this cafe every Sunday morning and it would be half-full of Tottenham fans and half-full of Arsenal fans.

"The banter between them was fantastic."

Jones would not be the first England rugby boss to try their luck in football circles were a move to be made.

That experiment flopped, as he lasted a little over a year with the Saints, but more may be lined up.

Jones likes to keep across events in football and claims last season's epic Champions League semi-final clash between Liverpool and Barcelona at Anfield is the finest sporting event he has witnessed.

He added: "Last game I saw was that Champions League semi - Liverpool vs Barcelona at Anfield.

"The best sporting event I've been to! It was just the atmosphere; I remember walking off and the girls who served the dinner are crying...

"Just the total emotion that ground has is incredible."