Honda and Kalou's Botafogo adventure ends in chaos and relegation 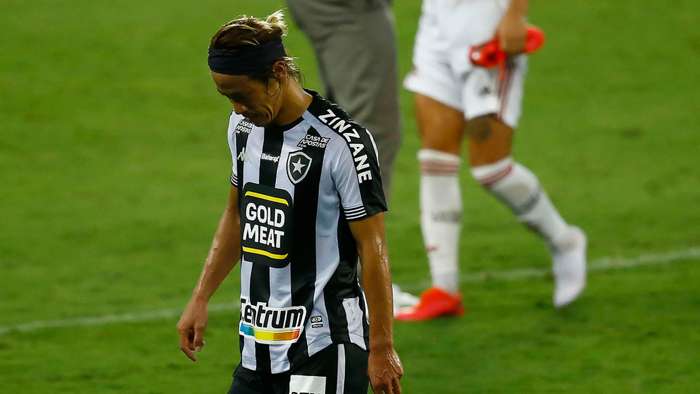 At the start of 2020 Botafogo embarked on an ambitious bid to establish themselves back among Brazilian football's elite.

After years of underachievement, and despite the hardships caused by the Covid-19 pandemic and the resulting financial crisis, the side had high hopes for the coming season.

Ultimately, though, those dreams proved wholly misplaced. Far from fighting among the likes of Flamengo, Internacional and Palmeiras for honours, Botafogo are now bracing themselves for at least one term exiled in Serie B after suffering an historic relegation.

On Monday, already condemned to the second tier after losing to Sport Recife 72 hours earlier, Botafogo suffered their latest humiliating defeat - 5-2 at home to Gremio.

It was their 15th such setback in their last 17 Serie A outings and 24th overall in the 2020 season - a dismal run which has left them rooted to the bottom of the table and without any hope of survival with three games remaining in the campaign.

Since the Brasileirao kicked off in August, the club have sacked no fewer than five coaches, with each averaging fewer than seven league games in charge. Such was the malaise at the club,new president Durcesio Mello announced upon taking over in January that he had fined players guilty of not showing commitment.

"We cannot allow the club to be so exposed to this critical situation without solid signs of a reversal. We have to make firm demands,” he explained in an open letter to fans, although his initiative failed to arrest the side's calamitous path to the second tier.

What, though, or who was behind such a collapse? Unsurprisingly, many eyes are trained firmly on the club's ex-president Nelson Mufarrej, who yielded his post to Mello with the Fogao already in chronic condition.

The day after the club's heavy defeat to Gremio, a group of fans submitted a formal petition at the Rio Public Prosecutor's Office to open criminal investigations against Mufarrej and his board for "Acts of Reckless Administration".

The petition, which accrued more than 10,000 signatures, has almost zero basis in law and likely will not prosper, but it is a clear sign of the anger with how the club has been run over the past 12 months and longer.

"I want to give the fans joy. I will give my all as a player,"vowed Japan legend Honda when he was unveiled;one of the 46 players signed by Mufarrej in his three years at the helm and one of 25 signed in 2020 alone.

Both Honda and Champions League winnerKalou caused a great stir when they arrived in Rio. They were almost joined by another giant of the game, former Barcelona and Manchester City star Yaya Toure, before negotiations were cut short due to the outbreak of Covid-19. Bayern Munichtreble winner Arjen Robben was also on the club's hitlist.

But neither managed to stand out in their new home. Honda performed on an intermittent basis, netting three goals in 27 games before leaving in the New Year in order to secure a contract in Portugal.

Kalou, meanwhile, has been little short of a disaster. The Ivorian has scored just once in 27 games for Botafogo and in Serie A has completed the full 90 minutes on a mere three occasions. In Botafogo's last six outings, as they struggled desperately against the drop, he was entrusted with a total of 24 minutes of game action.

In the background, meanwhile, is the club's crippling economic state. No less than $150 million (£108m) of debt blemishes thebalance book, one of the highest in Brazilian football. Even keeping the lights on and thewater running - and paying salaries on time - was provinga challenge for the club, but it did not discourage further profligacy from those in charge.

In a typical gambler's flourish, Mufarrej went all in on reviving his side's fortunes with a huge outlay of cash they could ill-afford in 2020; that bet failed miserably, and now the future looks bleak indeed both on and off the pitch.

Botafogo can at least take heart from a few positive examples elsewhere in Serie A. Three years ago Internacional were also in the second tier after suffering their first-ever drop; the Porto Alegre outfit bounced straight back up and now lead the Brasileirao with just three games to go.

Chapecoense have also made an instant return to Serie A after just one season down in 2020.

Conversely, Belo Horizonte giants Cruzeiro have lurched from crisis to crisis since their own maiden relegation in 2019, suffering a six-point deduction imposed by FIFA over transfer irregularities, finishing 11thin Serie B and also receiving two separate transfer bans for their financial irregularities.

“Crisis is also an opportunity, which will give us another chance to build a stronger Botafogo,” an optimistic Mello told the club's television station following confirmation of relegation. “I have always found you have the best chance to rebuild during crises.

“The supporters are sad and angry and justifiably so, but we will rebuild this Botafogo team to be strong and victorious once again.”

There is certain room for optimism. Stalwart Paraguayan goalkeeper Robert Fernandez has confirmed he will stick with the club in Serie B, while the performances of young academy graduates Kanu and Caio Fernandes - and other promising talents drafted in to the starting XI out of sheer desperation in these final weeks - have far out-stripped anything by many of those signed by Mufarrej.