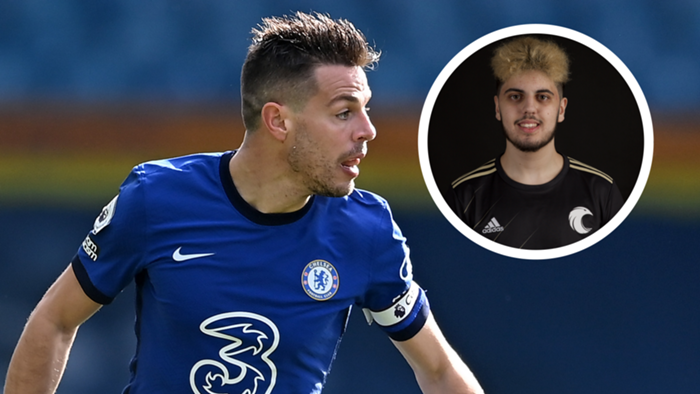 In April 2020, during the first UK coronavirus-enforced lockdown, Cesar Azpilicueta announced that he was starting an eSports team called the Falcons.

His FIFA 21 gamer Diogo Mendes is now out to win the ePremier League for the team and for Chelsea.

The ePL takes place between 23 and 26 March and brings together 20 professional gamers to compete for the league title over three days.

Mendes, 19, was born in Portugal and lives in Norwich, and won his qualifiers to represent Chelsea on merit, rather than through his connection with Azpilicueta. However, the fact that he also plays for Chelseas captain adds an extra dimension ahead of the upcoming event.

"Cesar Azpilicueta messaged me on Twitter to start the conversation and I thought: â€˜Wow! This is crazy that he wants me to sign for the Falcons!â€™," Mendes told Goal. "We started talking and we reached an agreement and I signed for them.

"I want to represent the Falcons as best I can, as well as Chelsea, which is his team. Surprisingly, he is very hands-on and it makes him an incredible boss. He is always in the WhatsApp group messaging and supporting our games.

"There was a qualifier recently where he was watching the game. I like that he is involved. I prefer that than to have a boss who cares only cares about the business part. He helps us and I have seen him play and he is not bad at it himself.

"We had a Club World Cup; it is a long process and a lot of weeks. We had a week where it didnâ€™t go too well and he was messaging me and my team-mate and he was telling us to keep our heads up and we go again. It happens; he is definitely a leader.

"I feel incredibly lucky to do this as a full-time job. It is a good platform that I am fourth in the world and now I want to improve on that and aim for that No.1 spot."

The Falcons are a professional eSports outfit and their roster of gamers compete in tournaments and work full-time through playing FIFA tournaments on Xbox and Playstation.

Azpilicueta co-runs the team with Cacho01 (Jose Antonio Cacho) and Delantero09 (Jesus Rincon), who are top players in Spain with YouTube follower numbers in the millions.

We are no satellite club - Vitesse defend good relationship with Chelsea

He needs to see the dentist! - Tuchel confirms tooth problem will keep Mendy out of Senegals international break