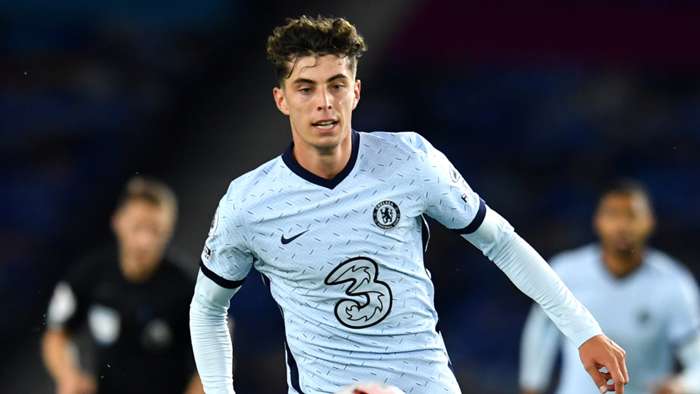 Kai Havertz thinks the £70 million ($91m) deal that Chelsea secured to sign him from Bayer Leverkusen won't weigh heavy on his mind, and says it was his long-term desire to play in the Premier League.

Despite long-held interest from Bayern Munich and Real Madrid, the two clubs couldn't compete with the Blues who have gone on to spend around £200m ($252m) on five transfers this summer, to the envy of their rivals.

At his unveiling to the UK media, Havertz believes that his game won't be affected by discussions around the fee Chelsea paid to secure his services.

"Of course, it's a big price tag, but I think in football today it is normal to pay these prices," Havertz said. "For me I will not put a lot of pressure on myself because I think I am doing not the best or the worst because the price tag is that high.

"I am trying to focus on football and trying to play my best football here in Chelsea and not put pressure on myself. I'm just playing football, I love to play football. That's why I'm here. I'll try my best.

Havertz racked up quite the list of achievements in the Bundesliga, becoming Leverkusen's youngest captain, as well the youngest player to reach 100 appearances in the division.

Few players in Europe can match his goalscoring ability from midfield, which might soon lead to comparisons with his manager Frank Lampard.

Like many his age, the Germany international grew up watching Lampard in the Premier League on television, which was part of the attraction to move overseas to continue his development.

"I watched many games of him as a kid," Havertz added. "He also liked the way I play as a midfielder – to go in the box, to score goals and make assists. I think that helps a lot to have a manager who played such a long time in the Premier League and the national team.

"He can give me tips and I think he will help me a lot to become a better football player, a better midfield player, so I am very excited that he is my manager now. For me it's a perfect step to come from Leverkusen to the Premier League.

"It is another way here to play football. I watched it a lot and for me it was always the best league in the world with the best teams. I'm now very happy to be playing for one of the best teams in England, the world as well.

"I'm actually very thankful but obviously I need a little time to adapt to the league. It is a big step to come to another country, culture and language. It is very different than before and that takes some weeks to adapt to, but I am looking forward to it.

"It's very different to Germany but I'm looking forward to it and I think on Sunday it will be the first improvement for me. I was dreaming as a kid to play in the Premier League and for Chelsea as well, a very big club and one of the best in the world.

"I've always dreamed of playing in a league like that and for me the dream came through very early. I'm just 21. Of course I watched the Premier League as a kid, very often with my family and with my parents.

"Now it seems a bit unreal for me and my family that I am sitting here at a club like Chelsea. I'm very looking forward to it and hopefully, it's a very good time for me."

Chelsea used both of their new Germany internationals against Brighton, with Havertz lining up alongside striker Timo Werner in a fluid attack that also contained the England international duo of Ruben Loftus-Cheek and Mason Mount.

At timesthe front four linked well in the 3-1 win, but the goals came from unlikely sources with Jorginho, Reece James and Kurt Zouma all scoring.

Still, it seems that this approach used by Lampard might be the best way to get the most out of Havertz in a team littered with attacking talent, andhe discussed his favoured position.

"I played, I think, every offensive position at Leverkusen. I played as a right-winger, a No 10, a No 6, No 8 – sometimes as a striker as well," he said. "But for me it is very important to have that flexibility on the pitch and to be creative, those are the things that I like.

"I think I can play many positions, of course for me my best position is as a No 10, but I can play on the right side as well or as a striker. To be honest, I am happy to stay on the pitch and I think I am flexible."

As he adapts to English football, Havertz has Werner as well as Antonio Rudiger to help him being fellow Germans behind-the-scenes. Havertz is happy to link up with a genuine friend in Werner having played against him in the Bundesliga.