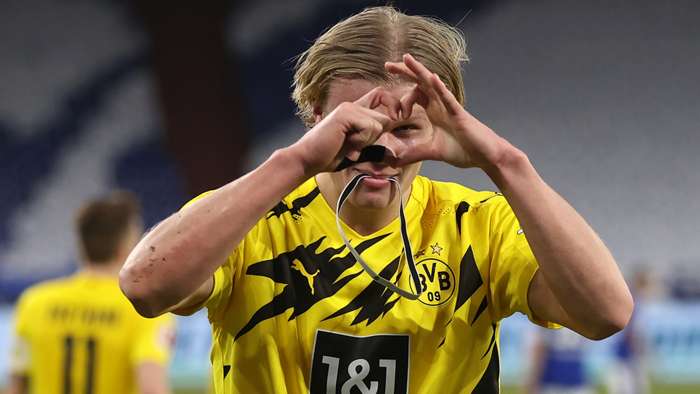 Erling Haaland is paying little attention to the transfer talk suggesting that he is a summer target for the likes of Manchester City and Barcelona, with the Norwegian striker eager to point out that he has a long-term contract in place at Borussia Dortmund.

The 20-year-old has emerged as one of the hottest properties in European football, with leading sides from across the continent falling over themselves in an effort to work their way to the front of a recruitment queue.

Big-money offers are said to be in the pipeline, with the most ambitious of clubs eager to buy into world-class potential, but Haaland says he will continue to turn a deaf ear to the rumours and keep his focus locked on the present.

Quizzed on the gossip at a press conference after linking up with the Norway national team, Haaland said: “I still have three years of contract [at Dortmund]. I am not worried about that.”

A meteoric rise to prominence has been enjoyed by a forward who was turning out for Molde in his homeland as recently as 2018.

Time spent in Austria at Red Bull Salzburg proved to be a useful stepping stone, with Champions League exploits allowing his stock to soar.

Dortmund won the race for a much sought-after signature in January 2020, as the likes of Manchester United were fended off, and Haaland has hit 49 goals for them through as many appearances.

Many are already tipping Haaland to be a Ballon d’Or winner of the future, with a standing being taken up alongside the global elite.

He is being billed as a natural successor to Lionel Messi and Cristiano Ronaldo when it comes to maintaining remarkable standards at the very highest level, with Paris Saint-Germain frontman Kylian Mbappe also being placed into that bracket.

Haaland is, however, eager to avoid such comparisons for now as he is fully aware of how much work he has to do in order to get close to two all-time greats that boast 11 Ballon dOr wins between them.

He added on the Messi and Ronaldo talk: "The media are the ones who write about it, I dont focus on those things.

“I want to improve every day. Ronaldo and Messi ... I dont need to talk about them, they are the best of all time. They are still very far away.”