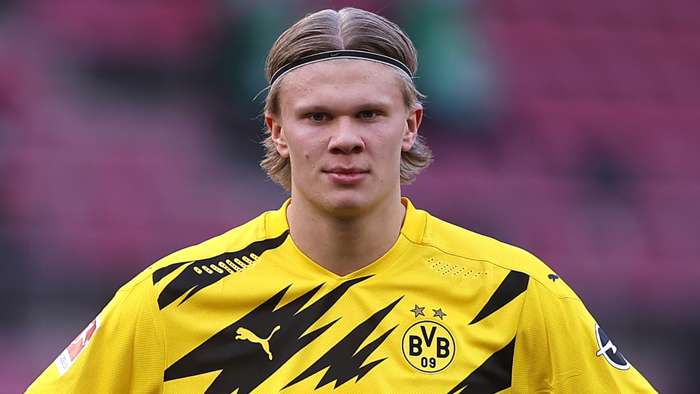 Erling Haaland moved to ease concerns among Borussia Dortmund fans following hisreaction at the end of the 2-2 draw with Koln.

The Norwegian forward scored both of BVBâ€™s goals, the second of which came in injury time.

Following the final whistle, Haaland took off his shirt and passed it to Koln defender Jorge Mere before walking straight down the tunnel.

In light of the speculation surrounding Haalandâ€™s future at the club, his response at the final whistle of the Bundesliga clash on Saturday raised eyebrows - and it was perhaps telling that he was quick to respond.

Writing on Instagram , Haaland said: â€śNot a great result. We will use this as motivation to be back stronger!

â€śThanks to all the Borussia Dortmund fans for your continued support. Weâ€™ll be back soon!â€ť

The forward has commanded plenty of column inches in recent weeks, with the likes of Bayern Munich, Barcelona, Real Madrid and Manchester City all credited with an interest.

Haaland has allowed others to talk about him rather than address speculation, and he has made no noises with regard to wanting to leave Dortmund this summer.

The 20-year-old has said his aim is to challenge for the biggest honours in the game, and it is likely that he will be prised away from Dortmund at some stage.

The club said earlier this month that their priority was to secure Champions League football in order to retain Haalandâ€™s services next season.

A draw at Koln, who had lost four of their previous five games prior to Saturdayâ€™s match, leaves Dortmund four points adrift of Eintracht Frankfurt who occupy the fourth Champions League qualification spot in the Bundesliga.

If BVBâ€™s aim is to secure a top-four finish to retain Haalandâ€™s services, they are making a poor fist of it.

They are struggling for consistency, despite Haalandâ€™s best efforts. The forward has scored 10 goals in his last eight appearances across all competitions, but his form has not been enough to propel the side into the top four.

Haalandâ€™s opening goal against Koln was jaw-droppingly good, as he controlled a ball into the box, shrugged off the attentions of Mere before firing the ball home.

Dortmund were unable to convert thatpositive early start into three points, and at times they looked devoid of ideas under coach Edin Terzic, who is a man on borrowed time with Marco Rose set to replace him at the end of the season.

Rose will bring fresh ideas and an injection of momentum, but results need to improve or he may be faced with the prospect of seeing the clubâ€™s star man head out of the door before he has got his feet under the table.