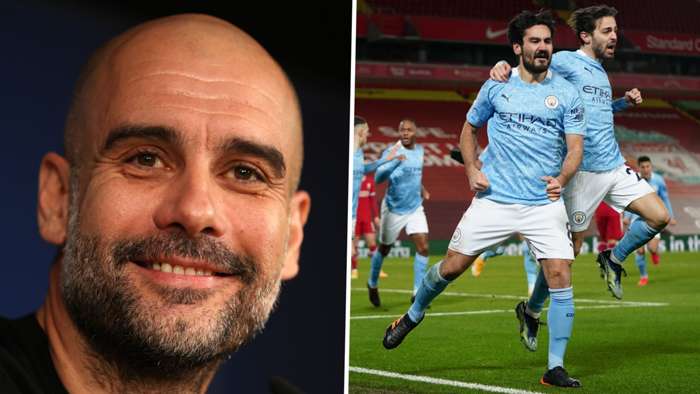 Manchester City set a new benchmark in excellence on Wednesday with their 15th straight win in all competitions, a mark no other English top-flight side had previously managed.

He was not to be disappointed, as the Citizens ran out 3-1 winners to make history.

"It shows how special these players are and we're thinking about the next one," City's boss said in his post-game press conference.

"Now the record belongs to us and this record will be broken for sure because the sport is like this.

"But it means a lot, in this period, the toughest period - the Christmas time, the wintertime, to do what we have done so far is quite remarkable.

"But the important thing is the way we're still playing and our consistency. Now thinking of the next ones. We have an incrediblytough week ahead of usand we're going to approach it game by game."

After a mixed start to the 2020-21 Premier League campaign which saw City languish in mid-table going into December, the club have stepped up their chase to regain the title after losing out to Liverpool last year.

A disappointing 1-1 draw at home to West Brom on December 15 was the last time Guardiola's charges failed to win in any competition.

Since that setback City have triumphed in 10 consecutive Premier League matches to soar up the table, where they now enjoy a five-point advantage over rivals Manchester United having played one game fewer.

The Citizens have also prevailed in three FA Cup clashes and two Carabao Cup matches in that same interval and are now intothe quarter final and final respectively of those competitions.

Gabriel Jesus scored his side's third goal of the evening in south Wales to continue his fine record in front of goal during City's victorious run.The Brazil international has now scored in his last four starts, his best run of form since signing for the club from Palmeiras.

At the other end of the spectrum, Kyle Walker enjoyed a rare goal celebration in the FA Cup.No less than 3686 days had passed since the defender's last strike in the competition, which came while playing for Aston Villa against Sheffield United in 2011.