Haaland: Moukoko is the biggest talent in the world right now 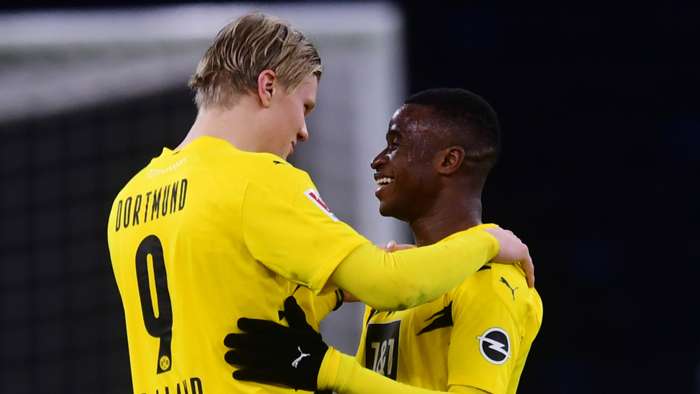 Erling HaalanddeclaredYoussoufa Moukoko is "the biggest talent in the world right now" after he made his Borussia Dortmund debut on Saturday.

Haaland, who was replaced by Moukoko, is widely regarded as one of the game's brightest prospects and was recently awarded the Golden Boy award.

The Norway star is adamant however thatMoukoko has the potential to usurp him -noting that age is very much on the teenager's side.

"I think he’s the biggest talent in the world right now. 16 years and oneday, that’s quite amazing. He has a big career ahead of him," Haaland told ESPN.

Asked about his own talent in comparison, he added:“I’m over 20 years, so I’m getting old now, so that’s how it is."

Moukoko has already represented Germany at U20 level and was playing for Dortmund's U17 side at the age of just 12.

Dortmund manager Lucien Favre was short of playerson Saturday and hopes Moukoko's first taste of senior football can spur him on to reach his full potential.

“He’s trained with us now for 14 days. Seven or eight players were away on international duty. It was 5-2 and it was good for him to play his first Bundesliga game butof course hehas to keep working," Favre said.

"He’s very, very young. We have a lot of attacking players, a lot who haven’t played today.”

On the match itself,which Dortmund won 5-2 after trailing 1-0 at half-time, Favre added:“We have to keep playing this way, play the ball forward more, make more runs into the box and the team did that immediately in the second half.”

Favre's side are currently second in the Bundesliga after eight matches - just one point behind league leaders Bayern Munich, who were held to a 1-1 draw with Werder Bremen on Saturday.