Griezmann praises Deschamps for deploying him correctly in France win 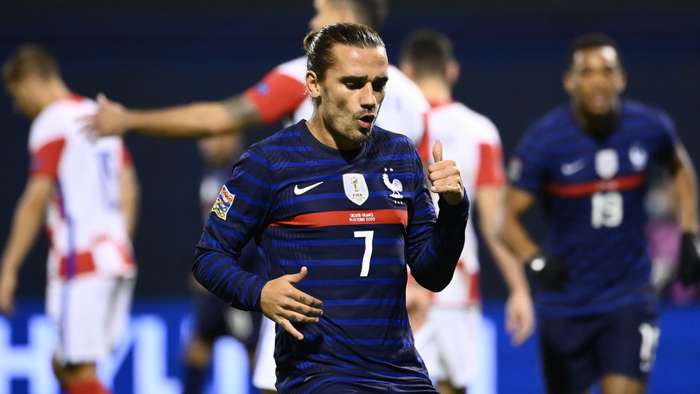 The former Atletico Madridplayerwas deployed ina centralposition as he worked alongsideAnthony Martial and Kylian Mbappe, who netted a late winner after Nikola Vlasic'sequaliser.

While he impressed for France, Griezmann hasyet to find form under new Barca boss Ronald Koeman. Playingpredominantly on the right flank, the 29-year-oldhasfailedto score or even create a chance in his three La Liga appearances in 2020-21.

However, he put any club issues to the back of his mind to help his country come out on top in the Nations League clash onWednesday.

"The coach knows where to put me," Griezmannsaid of Deschamps in an interview withTF1."I take advantage of this situation, of this place, of the confidence of the coach andmyteam-mates.

France's victory keeps them level on points with Group A3 leaders Portugal,the two nations having drawn 0-0 on Sunday.

"It was difficult for everyone.We knew we were going to have a battle," Deschamps toldTF1.

"We did the right thing in the second half.This team has always had character.Just because you won a title in 2018 doesn't mean you win with a snap of your fingers.

"If we didn't manage to score against Portugal, it's also because the opposition was good.We had great opposition today even if we had an excellent start to the match."

Deschamps was recently criticised byAlain Giresse for trying to deploy Griezmann as a No.10 in adraw with Portugal.

"The problem is, Griezmann has lost his confidence, and Didier is playing him to try and bring it back," Giresse toldL'Equipe.