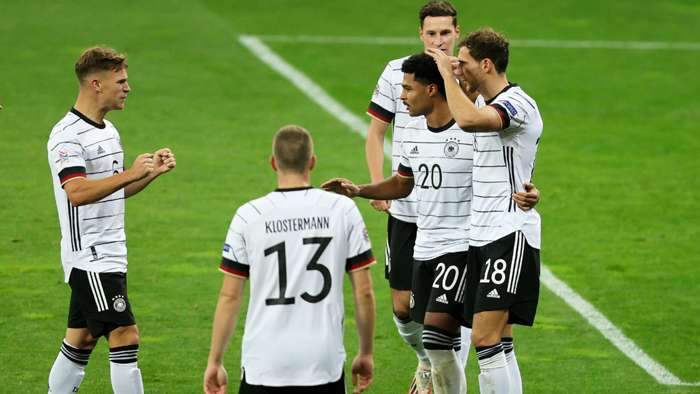 Germany will be looking to build on victory over Ukraine when they welcome Switzerland to the RheinEnergieStadion for Tuesday’s Nations League clash.

Joachim Low’s men picked up their first ever victory in this competition in Kiev on Saturday, having drawn four and lost two of the previous six.

Despite that uninspiring record, they are clear 2/5(1.40) favourites with bet365 to follow that result up by coming out on top in Cologne.

The Nati have picked up just one point from their three opening group games and are 6/1 (7.00) outsiders to pull off a shock win here.

That point did come in a 1-1 draw against this opposition in the reverse encounter, and you can get odds of 15/4 (4.75) on them earning another stalemate in this one.

Timo Werner and Kai Havertz will be hoping for a place in the starting XI after starting on the bench in the win over Ukraine.

Manuel Akanji is unavailable after testing positive for COVID-19, although Xherdan Shaqiri could return to the starting line-up after his original positive diagnosis was subsequently overruled.

Although they did finally get the long-awaited Nations League win, Germanywere denied the clean sheet that has evaded them in the competition since their first ever match against Spain - conceding in all six since.

Having gone five matches without a clean sheet in all competitions coming into this one and conceding three in their last fixture on home turf versus Turkey, it is hard to back them holding strong on Tuesday.

Indeed, Vladimir Petkovic’s team has only failed to score against Spain in their last seven matches, hitting the net in 12 out of 15 matches in all competitions.

All in all, odds of 4/5 (1.80) are well worth backing on both teams getting on target for the fourth meeting in five between Germany and Switzerland.