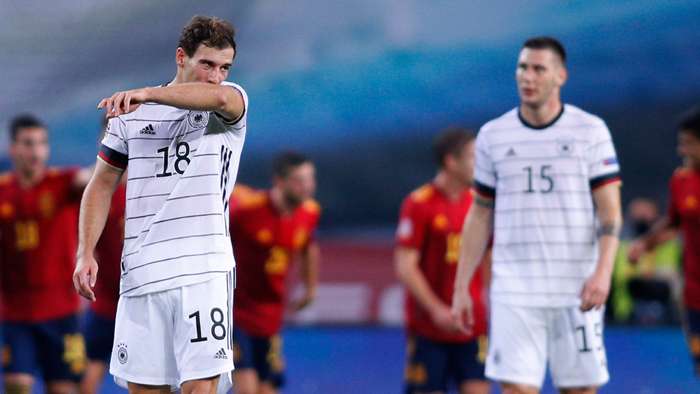 Germany’s humiliating 6-0 defeat against Spain on Tuesday night was their worst defeat in almost 90 years – and their worst competitive defeat ever.

The result surpassed famous losses such as the 5-1 defeat to England in 2001 and the 8-3 defeat West Germany suffered to Hungary during the 1954 World Cup.

It was equalled only by a 6-0 defeat to Austria in 1931, and beaten only by a 9-0 thrashing against England Amateurs in 1909 – when the concept of a German national team was in its infancy. The last time Germany conceded six in a game was during the 1958 World Cup, in the third-place play-off against France.

The result will raise serious questions about Low’s position as manager, with a serious inquest surely on the way after the manner of the defeat.

Germany failed to have a single shot on target during the game, and had only 30 per cent of possession. Serge Gnabry hit the bar but the hosts could have scored more than the six they finished with, having 23 shots – 16 of which came from inside the penalty area.

Morata opened the scoring early on from a corner. Morata arrived untracked to head past Manuel Neuer, perhaps evoking memories of an unmarked Thomas Muller stroking home to open the scoring in Germany’s famous 7-1 evisceration of Brazil in 2014.

The lack of marking from Germany’s defence proved a sign of things to come as Manchester City duo Torres and Rodri made the game safe before half-time.

Real Madrid captain Ramos walked off with what looked like a hamstring injury before the break but the defender will no doubt have enjoyed his side’s second-half display with Torres adding two more and Oyarzabal adding some final gloss late on.