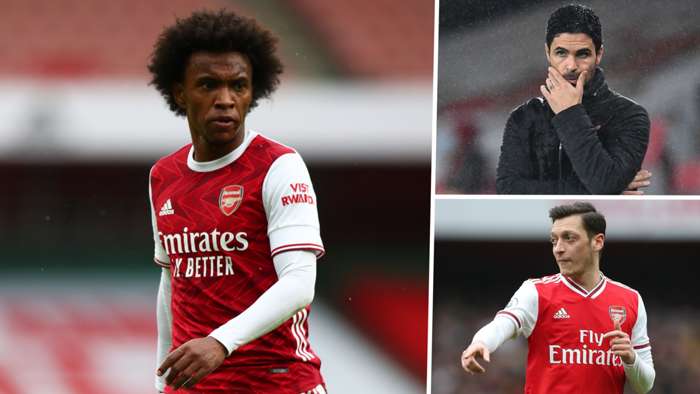 It all started so well.

The 32-year-old had a hand in all three goals as Arsenal kicked off the new Premier League campaign with a convincing win at Craven Cottage, setting up two and seeing his shot deflect into the path of Alexandre Lacazette for the other.

He was named man of the match, receiving just over 63 per cent of all the votes cast by Arsenal fans around the world.

“I don’t think it gets much better than that,” a delighted Mikel Arteta said after the game. “He showed how much he really wants it and how much he is going to drive the other players on.

“He was decisive and that is what we are looking for him to do in a consistent way. He is a player with tremendous quality."

It looked like Arsenal had found the ideal man to replace the void created by Mesut Ozil's ostracisation, but wind the clock forward a couple of months and Willian is in danger of becoming a big problem for Arteta.

The attacker has yet to score in the 10 appearances for the club and hasn’t added to his assist tally since that opening-day success at Fulham.

His under-par performances already have people questioning the wisdom of handing him a three-year deal worth around£150,000 ($197,000) a week and there are growing demands for Nicolas Pepe to be given an extended run in the side at the Brazilian's expense.

So, have Arsenal made a costly error in handing the two-time Premier League winner such a long contract? Or is it a case of Willian simply taking his time to adapt to a new club following seven successful years at Chelsea?

"I think he started really well with his first game against Fulham,” said the Arsenal boss. “Since then, we’ve been changing the front three, he had an injury and he didn’t have any time to train, any pre-season – he was later than the others.

“I can see a development in the last games. The understanding of things I ask is probably different to what he’s used to, but he’s getting better and better.

"We all know the quality he has and he’s a great option to have on the pitch. I think he’s a player that can make the difference.”

Willian’s quality certainly can’t be doubted. He has won almost everything there is to win during his career and was one of Chelsea’s stand-out performers last season, when he played a key part in the Blues securing Champions League qualification.

He scored 11 goals and provided nine assists for Frank Lampard’s side, creating an average of 1.7 chances per game for his team-mates at Stamford Bridge.

The problem is, of course, that he's been so far unable to replicate that sort of form in north London, aside from that one dazzling display at Craven Cottage.

There were signs during Arsenal’s 1-0 win at Manchester United that he was beginning to find his feet. He worked tirelessly on the right-hand side of the attack at Old Trafford and saw one fine effort clip the crossbar after Pierre-Emerick Aubameyang had played the ball into his path.

However, a dreadful display against Aston Villa last Sunday night – when Arteta’s side fell to a thumping 3-0 defeat – had the critics on his back once again.

Arsenal’s manager will now use this international break as an opportunity to analyse the opening months of the season and the form of his front three will no doubt be at the top of his agenda.

Aubameyang, Alexandre Lacazette and Willian have only five league goals between them and Arsenal have managed just nine in their first eight games – their lowest tally since the start of the 1998-99 campaign.

Something needs to change and it could be that the front three has a new look to it when Arsenal return to action at Leeds United on November 22.

However, even if Willian does find himself on the bench, it is far too early for the Brazil international to be written off or labelled a flop.

Every player, even an experienced one, needs to be given time to adjust to a new club, to new team-mates, a new way of playing anda new manager.

So, it is perhaps no surprise that Willian has openly admitted that it’s not been easy adjusting to the strict way Arteta want his team to play.

“I hadn’t worked with a coach with that mindset,"the ex-Chelsea star told Globo Esporte . "The positional game doesn’t mean that you have no freedom on the pitch, but many times you have to respect the position, what the coach asks, the instructions, understanding that it’ll be better for the team.

"It may happen that you don’t touch the ball and get frustrated, but Mikel always says 'Wait a minute, the ball will arrive.' I’ve been learning a lot."

Willian has had plenty to take on board since he made the move from Chelsea. It must also be noted that he was happy at Stamford Bridge and would have remained in west London if the offer of a three-year contract had been forthcoming.

“They knew how much I wanted to stay,” he told the Daily Mail . “I wanted to be a legend for the club.”

That’s not to say Willian is unhappy at Arsenal, but it’s another reason why he deserves a bit of time to adjust to his new surroundings in to his new club before being deemed another expensive mistake who will do little but take up space on the wage bill for the next three years.

"He’s got the ability to find that last action to open the door when everything is really tight,” Arteta has argued. "He’s getting better and better and he'll prove a great option to have on the pitch."

Willian has yet to show his full range of qualities in an Arsenal shirt, however, and it would be no surprise to see the attacker dropped for the trip to Leeds.

But that would not signal the end of the road for a player who has clocked up 241 appearances in the Premier League since he arrived from Anzhi Makhachkala in 2013.

He showed against Fulham he still has plenty to offer and he has a manager whostaunchly believes he will soon showthat kind of class again.