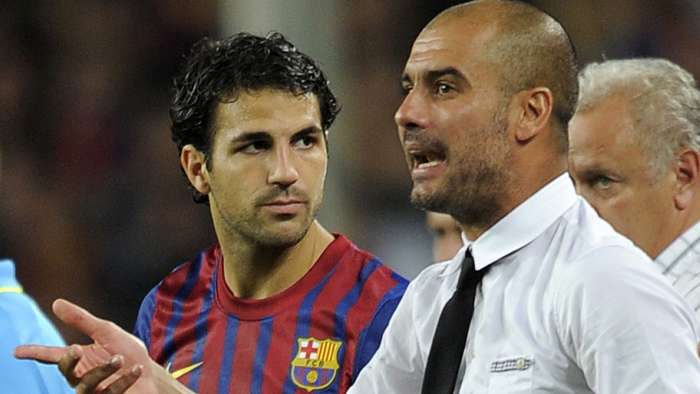 Former Barcelona and Chelsea star Cesc Fabregas has expressed "disappointment" in his old mentor Pep Guardiola, while revealing he still considers Jose Mourinho a "friend" to this day.

Guardiola lured Fabregas to Camp Nou from Arsenal back in 2011, having seen him emerge as one of the best midfielders in Europe at Emirates Stadium.

Barca went on to win four major trophies during the Spaniard's first full season at the club, but ultimately missed out on La Liga and Champions League honours.

Guardiola decided to call time on his four-year reign in Catalunya at the end of the campaign, and took a 12-month sabbatical before returning to management at Bayern Munich.

Fabregas says hehasn't spoken to the 49-year-old, who is now in charge at Manchester City, since his departure from Camp Nou, and has hinted that the pair's relationship has been damaged beyond repair.

Asked if he'sbeen in contact with Guardiola at all over the past eight years, the Monaco playmaker told CCMA: "No, no, with Pep nothing at all.

"I don't know if the disappointment with Pep is mutual. Things happened, but I prefer not to talk about it. Pep was my idol since I was a child. It is from him that I have learned the most, perhaps, since I was four until now."

Fabregas eventually left Barca to join Chelsea in 2014, and went on to pick up his first Premier League title under Mourinho.

The 33-year-old has credited aman currently occupying the hot seat at Tottenham for helping him to rediscover his best form at Stamford Bridge, having previously seen him as a rival during his time at Arsenal and Barca.

"Mourinho inspired me the most when I left Barca," Fabregas added.

"He told me that we had had our issues on the pitch when he was at Chelsea and I was atArsenaland then when he was coaching atReal Madridand I was at Barcelona, but that for him, it all ended there. We turned the page.

"He told me about his project. I had to go where I thought I would do best, the decision was mine and it didn't depend on what people said. I prioritised the professional aspect, and today I still write to him and I consider him a friend.

"He helped me a lot at a difficult time in my career and perhaps I played one of my best seasons with him."