First Bruno, then Brady: How the Glazers oversaw the two best sports signings of 2020 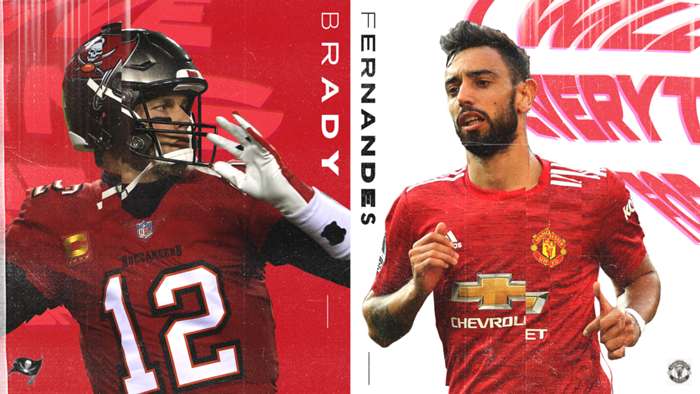 Tom Brady, by all accounts, is one of the best players to ever set foot in the NFL. A classic underdog story, Brady rose from obscurity to become a champion, smashing record after record while making a pretty damn strong case to be the game's greatest of all time.

But, as Brady prepares for another Super Bowl and another chance to etch his name even further into immortality, there's another football comparison that feels a little bit more apt: Bruno Fernandes.

On the surface, Brady and Fernandes have little in common. Brady, the 43-year-old NFL icon, is certainly on the downswing of a legendary career. Fernandes, meanwhile, is just reaching his prime at age 26, having only truly been in the limelight for just over a year.

But Brady and Fernandes both find themselves in a similar position this winter. They'reboth looking to lead their respective teams to titles this season, and both are the primary reason that those teams have any hope of those claiming those titles atall.

Both clubs, coincidentally, are owned by the Glazers, who had been the target of plenty of criticism for the hard times experienced under their ownership.

Most importantly, though, their team's current title hopes can be traced back to last spring and a three-month period that set two franchises on two different continents on their own paths towards glory.

Around this time in 2020, both Manchester United and the Tampa Bay Buccaneers were at a crossroads. Man Utd were a team in no man's land, nowhere near the title and in desperate need of a rebuild. Their star, Paul Pogba, was alternating between world-class and mediocre depending on the week and their coach, Ole Gunnar Solskjaer, had yet to prove himself as a top-level manager.

In the U.S., the Bucs, meanwhile, were even further away from glory. The team faced a crucial decision with quarterback Jameis Winston, a mercurial player that, like Pogba, alternated between the spectacular and the mystifyingly confusing. Their coach, Bruce Arians, was working to steady a ship, one that had missed the playoffs in 12 consecutive seasons and were on their fifth coach of that span.

Last March, Brady confirmed that he would leave the New England Patriots, the only team he'd ever known and the one he had led to six Super Bowl titles. And in swooped the Bucs, a team that had a solid collection of talent but no real leader or star to take that talent to a different level. Both parties, by any measure, were all in. This is Brady's last chance at glory and this is the Bucs' bold move to ensure that they're the team along for the ride.

Brady was given atwo-year contract with theTampa Bay Buccaneersworth a total of $50 million (£37m) in guaranteed salary, and the aging quarterback has done nothing less than exceed every hope. He kept the Bucs in the hunt all through the regular season, finishing second in the league with 40 touchdown passes, before leading his new team past the New Orleans Saints and Green Bay Packers in the playoffs, both on the road.

The win over the Packers, in particular, was vintage Brady, as he outdueled a fellow future Hall of Famer in Aaron Rodgers. His perfectly-placed touch pass to Scotty Miller in the dying seconds of the first half capped off a dominant start to the game, with Brady leading the Bucs to a 21-10 halftime lead.

The second half began with another touchdown pass, Brady's third, one that all but put the game out of reach. Despite several second-half turnovers, Brady's first-half blitz was enough to send the Bucs to their first Super Bowl since 2002.

The signing has completely changed the paradigm of the NFL. Brady's Bucs are near the top of the league after so many years of mediocrity while his old team, the Patriots, completely floundered, missing the playoffs for the first time in 11 years. For years, the Patriots' success was attributed to the "Patriot Way", a mystical culture put forth by head coach Bill Belichick. But, if this season was any indication, "the Brady Way" was the most important piece of that culture.

“His leadership is beyond anything I’ve ever seen. Peyton Manning is the only thing close,” Arians said last month, alluding to the two-time Super Bowl winner that was once Brady's biggest rival.

He added: “It’s a never-ending thing with him, the perfectionist, to get everything right in practice. Also, his calmness on the sideline in games when we’re not winning, saying ‘We’re going to win.’ Those type of things. You put those in a bottle and you make a bunch of money.”

Despite switching teams and moving to a different conference, Brady looks like the same old Brady. The Bucs bet on themselves being one big piece away, and it turns out that Brady has been that exact piece.

Manchester United, meanwhile, looked several pieces away last winter before they signed Fernandes. They'd won just nine of their first 24 games of the season, and calls for Solskjaer's dismissal were beginning to grow louder and louder. The club was desperately screaming out fora No.10, and Fernandes was the one they settled on.

They shelled out€55 million (£47m/$60m) to sign the Portuguese midfielder, who has become an international star over the last calendar year. He's scored 29 goals in 54 games while chipping in 18 assists and claiming four Premier League Player of the Month awards in less than a year,becoming the first footballer in the English top-flight to ever do so.

"Three goals and four assists was a complete month," Fernandes toldthe Premier League websiteafter receiving the award once again in December. "Scoring and assisting your team-mates is perfect. I want to achieve other trophies and awards but I’m really happy to make history.

"It’s a long way before we can start talking about being champions.We have to keep working. We play against one of the best teams in England and we know what it means to the fans, but the main point is the same: three points.”

He's almost single-handedly taken Manchester United from underachieverto contender, becoming one of the world's top players in the process.

"He’s such a humble human being, working hard; and I think everyone has seen what he’s done on the pitch. I’m very pleased with his first year and long may it continue, because the higher up in the league, the more pressure there will be on us and on him because now the limelight is on him, but I’m sure he’ll handle that pressure fine."

By signing Brady and Fernandes, the Glazers have turned their teams into title contenders. Brady has provided that veteran spark, lifting a talented team far further and far faster than they could have hoped. And Fernandes has given Manchester United that true world-class No.10 that every team covets, the type of player that can win a game all on his own even when he has no business doing so.

Both face uphill battles in their title races. Brady and the Bucs are underdogs against the Chiefs, a team led by Patrick Mahomes, pegged by many to be the young star ready to take Brady's crown. And Manchester United are still chasing crosstown rivals City, who have looked like juggernauts over the last several months.

But, despite those uphill battles, it is clear that both teams are headed in the right direction. The Bucs look set to contend for as long as Brady is at the helm and Manchester United look poised to rejoin England's elite, just like the good old days.